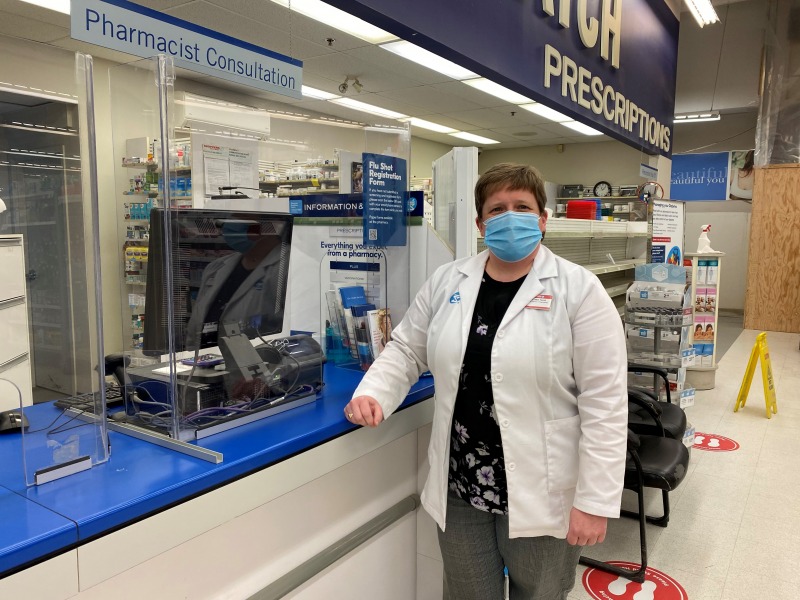 When Christina Tulk took over as chair of the Canadian Pharmacists Association (CPhA) last November, the world was, as she puts it, “knee deep in COVID.”

“The pandemic has taken a horrible toll on many, many people, with so many unexpected deaths, so much illness and mental stress.”

Ms. Tulk says her education at Memorial’s School of Pharmacy not only prepared her for pharmacy practice in good times and bad, it prepared her for the leadership and advocacy role she’s taken on with her national professional association.

“There were so many opportunities for leadership in the school. That’s where it really started for me. I was class rep for three years and student representative on the Newfoundland and Labrador Pharmacy Board.”

She attributes those early experiences, along with the school’s small class sizes and accessible faculty, as key to fostering student leadership and engagement.

One of her favourite memories is a presentation by local pharmacist Brian Healey, who talked to students about independent pharmacy ownership.

“I was really taken by what he said, and I felt from that moment, that community practice was where I belonged, and ownership is what I would work towards in my career,” she said. “That conversation shaped where I’ve ended up.”

She’s been with Shoppers Drug Mart since graduation, and a store owner since 2006 after she completed the in-house training program.

“There’s always something we can do.”— Christina Tulk

These days, in spite of growing demands on her time as CPhA president and running a large pharmacy in Corner Brook, she tries to stay in touch with the school.

“It’s important to give back to your school as graduates and alumni,” Ms. Tulk said. “Everyone can do something, whether that’s being a preceptor, serving as an interviewer or establishing a scholarship, there’s always something we can do.

“I was lucky enough to be part of Dr. Debby Kelly’s HIV point-of-care testing study,” she continued. “It was a really interesting project to be involved in and it all comes from those relationships that you start in school and develop in the profession.”

Though the scope of practice in 2021 is much different than it was when she graduated in 2002 — counselling patients was the hot topic in those days — Ms. Tulk says graduates of the school are well-prepared to adapt and change with the profession.

She applauds the introduction of the doctor of pharmacy (PharmD) program, along with changes over the years that emphasize clinical and professional practice.

“I think that ability to deliver care in a virtual environment will be sustained.”— Christine Tulk

In a tumultuous 2020 that began with Snowmageddon in St. John’s, followed just two months later by the COVID-19 pandemic, pharmacists and pharmacies found themselves at the forefront of the community response and patient health concerns.

“The COVID-19 pandemic has fundamentally changed how we go about our day and routines,” she said. “I think that ability to deliver care in a virtual environment will be sustained. Whether it’s reaching out to patients to do medication reviews, or those different types of things in a virtual environment, like chronic disease management for patients who haven’t been able to see their primary caregiver.

The pandemic also exposed the different scopes of practice among provinces, an issue Ms. Tulk continues to address in her work as CPhA chair.

“In some provinces you can prescribe for urinary tract infection — P.E.I. just got the scope for that. It doesn’t matter where you practise in Canada, you should have the ability to do that. You shouldn’t be limited by what the province has determined our scope to be.”