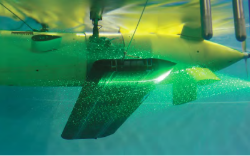 The multiphase REALM project focused on fostering commercial partnerships with local and national companies and to develop intellectual property internally by building new collaborations internal to the University. One such collaboration was with PanGeo Subsea Inc., to deploy a new sub bottom imager (SBI™) technology on the Explorer AUV.

For SBI deployment, the cost of operating a fully equipped Work Class Remotely Operated Vehicle (WROV) with fibre-optic umbilical and associated launch vessel are significant, even if entirely appropriate for uses such as oil and gas, subsea cabling etc. For other applications, such as pipeline pre-route survey or marine mining investigation, a more cost-effective platform is desired. An AUV and associated launch vessel has the potential to fulfill this role at an operational cost that can be as little as 10% of that of the WROV/large vessel combination.

In terms of survey cost and efficiency, an important advantage of using an AUV as the host platform for the SBI is that it allows fully autonomous operations. This frees the deployment vessel to perform other survey tasks, and can substantially increase the survey productivity rate. AUV’s are also quieter and more stable than either surface platforms or WROVs and have the potential to produce higher quality data.

The SBI hydrophone is 3.5m in length and must move forward over the seabed to be surveyed while mounted athwart the AUV much like an aircraft wing in relationship to the fuselage. 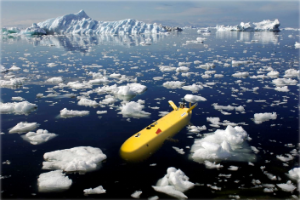 Between 2008 and 2010, MERLIN was engaged in a series of missions to test the suitability of the Explorer AUV under ice in a polar environment.

In 2008, the Explorer AUV was deployed from Canadian Coastguard Ship CCGS Shamook for a series of preliminary missions to study the Explorer's suitability for for deployment beneath sea-ice. During this time, an emergency localization system was developed, for location of the AUV in the event the vehicle's mission is aborted, or the vehicle becomes lodged under ice or off course during deployment beneath ice.

Following the preliminary missions, MERLIN was subcontracted by International Submarine Engineering Ltd. to deploy the Explorer in the Canadian High Arctic as part of Canada's effort to extend its exclusive economic zone under United Nation Convention Law of the Sea, Article 76. The role of MERLIN was to work with ISE during the lead up to the trials to develop technological solutions and procedures for polar AUV operations.

In March 2009, the Explorer was deployed for test trials to overcome the many barriers: logistical, technological, environmental, etc. standing in the way of successful under ice AUV survey operations. The successful trials included refinement of the through ice launch and recovery technology and protocols, though ice communication testing, high latitude inertial navigation system testing and simulated missions.

In June of 2009, a partnership was formed between the Australian Maritime College - University of Tasmania, the Institut francais de recherche pour l'exploitation de la mer (Ifremer) and Memorial to determine the acoustical, logistical and operational challenges to deploy the Memorial Explorer under the ice for an upward looking sonar survey of sea ice to validate aerial and satellite sea ice survey methods. Voyage one (V1-2009) departed Hobart, Tasmania in late October 2009 for Davis Station, Antarctica. Acoustic ranging experiments were conducted to characterize the polar acoustic environment and to asses the suitability of the RSV Aurora Australis as an AUV deployment platform and support vessel.

A subsequent effort was undertaken in 2010 with more extensive on ice experimentation being conducted and modified to reflect lessons learned in the V1-2009 trials. A longer hydrophone cable was utilized for the ranging experiments to isolate the hydrophone from the self-noise of the Aurora Australis and comprehensive characterization of the vessel's self noise was undertaken. A set of smaller scale acoustic localization trials were conducted on land-fastened ice.

[Back to MERLIN main page]