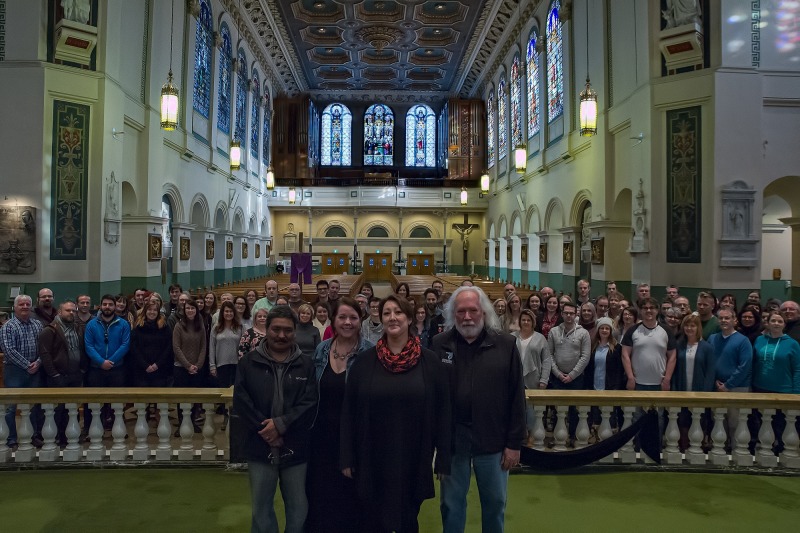 When soprano Deantha Edmunds performs her favourite aria from Handel’s Messiah in Inuktitut on Saturday night, she’ll think about her father Albert Edmunds who grew up in Hopedale on the Labrador Coast.

“It’s such a privilege to share this music,” said Ms. Edmunds, a classically trained Inuk singer. Ms. Edmunds joins 150 members of the Lady Cove and Newman Sound choirs, and the Newfoundland Symphony Orchestra’s Sinfonia, at the Basilica of St. John the Baptist in St. John’s, to perform Makkipok!, a concert of Labrador Inuit Music for Passiontide and Easter.

“My father passed away before Christmas,” said Ms. Edmunds, on a break between rehearsals. “So, learning this music, and singing it in Inuktitut, has allowed me to feel more of a connection with him. He grew up in Hopedale and would sing in Inuktitut, especially around Christmas. He’d sing in German, Inuktitut and English, which is how he learned to sing as a young boy.

"This music is special, it really is.”

That’s a shared sentiment among everyone involved in this Saturday’s concert, many of whom are School of Music alumni, and have played an instrumental role in bringing the repertoire to a St. John’s audience.

“There are many layers of how incredible this project is,” said Kellie Walsh, School of Music alumna and founder and artistic director of Lady Cove Women’s Choir. “The base layer, the most important piece, is the incredibly beautiful classical music.”

More than 200 years ago, Moravian missionaries introduced the European sacred music of composers such as Bach, Haydn, Handel and Mozart to the Inuit people of coastal Labrador.

“It’s fascinating, and suggests to me Inuit agency in the face of colonialism." Dr. Tom Gordon

Hymns and anthems were translated into Inuktitut, and performed across the coast in Nain, Hopedale, Hebron and Okak. Each church had its own choir and small orchestra and, over time, the Inuit musicians transformed this imported music into something that was truly an expression of their culture and everyday life.

“It’s fascinating, and suggests to me Inuit agency in the face of colonialism,” said Dr. Tom Gordon, professor emeritus and former dean of Memorial’s School of Music, who began travelling to Labrador 15 years ago in search of music he’d heard about.

He found 25,000 manuscript pages of music that were at once familiar and unique; music handed down through the generations and recorded in Inuktitut.

Because it took him many years to document and digitize all the material, he got to know the music, the communities and their musicians. He sang in their choirs and learned how, from one generation to the next, the music would be taught.

A natural next step for Dr. Gordon was to bring in his colleague, choral director Kellie Walsh. Through performances and recordings with artists like Nain tenor Karrie Obed, and soprano Deantha Edmunds, Ms. Walsh and Dr. Gordon have helped shine a light on this unique musical heritage.

“Then I wondered if it would be possible to bring my choir into this world, into this music, to experience its beauty,” said Ms. Walsh.

“We are singing in Inuktitut, which is such a beautiful, warm language." Kellie Walsh

Over 100 singers in two choirs, Lady Cove and Newman Sound, jumped at the chance to perform the repertoire.

Ms. Walsh and Dr. Gordon asked their friend Angus Anderson, who had grown up in Nain with this musical tradition, to work with the performers on the Inuktitut lyrics.

“We are singing in Inuktitut, which is such a beautiful, warm language,” said Ms. Walsh. “The audience will be treated to an incredible concert of gorgeous classical music."

“It’s going to be a spectacular experience,” said Ms. Edmunds. “I think this music is unique in the world.”

Makkipok! is dedicated to Mr. Obed, the tenor and musical tradition-bearer from Nain who died suddenly last September. The concert takes place at the Basilica of St. John the Baptist on March 3 at 8 p.m.