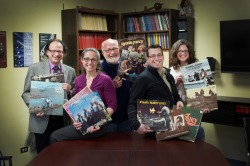 Here’s a recipe for success: Take some Irish music, Newfoundland music, and English music. Mix them all together, throw in a bit of French music and leave it to ferment for a couple hundred years.

Voilà, you’ve got the Newfoundland music Fergus O’Byrne discovered in 1971 when he arrived in St. John’s with fellow Irish compatriots and Ryan’s Fancy members, Dermot O’Reilly and Denis Ryan.

‘We fell in love with the place’

The three bandmates were astounded by the province’s musical culture.

“We found music similar to ours,” said Mr. O’Byrne, who grew up in Dublin, moved to Toronto in 1967, met up with Mr. O’Reilly and Mr. Ryan quite by accident, and eventually formed the music group.

“The Irish and English tradition of singing has really blended here. We found something here that existed nowhere else in the country. We fell in love with the place.”

Ryan’s Fancy toured the province back in the late 1960s, finding not only receptive audiences but a musical kinship with its residents. In 1971 they decided to relocate to St. John’s.

This musical mashup of traditions they encountered naturally seeped into the repertoire of Ryan’s Fancy, and is evident in What a Time! Volume 2, a new album launching Tuesday, June 13, at O’Reilly’s Pub in St. John’s.

The new CD is a partnership with the School of Music’s Research Centre for Music, Media and Place (MMaP), and Mr. O’Byrne’s longtime musical partner, Jim Payne of SingSong Inc.

What a Time! Volume 2 is a collection of 22 tracks that Mr. O’Byrne has distilled from around 70 gathered in the years following the release of What a Time – A Forty Year Celebration, the two-CD set issued in 2011 to mark the band’s 40th anniversary.

This new recording is a perfect first project to launch under the directorship of Dr. Harris Berger, MMaP’s director and the producer of the centre’s Back on Track series.

“Ryan’s Fancy has such a significant place in the story of folk music in this province, it seemed an absolutely natural fit,” said Dr. Berger, who is also Memorial’s Canada Research Chair in Ethnomusicology. “Historically, the centre has put out a wide range of CDs of new and archival music from across Newfoundland and Labrador. This just fits hand and glove with what we are trying to do at the centre.”

What a Time! Volume 2 is ninth in the Back on Track audio publication series.

All good recordings require the skills of a good sound engineer, of course. In this case, MMaP’s Spencer Crewe took on the task and was already well-known to Mr. O’Byrne for his work with bands like Great Big Sea and the first What a Time! CD.

“Doing what I do is an active way of being part of the creative process,” said Mr. Crewe, the centre’s digital audio studio co-ordinator, who remastered the 22 tracks in the new collection. “I’d like to introduce this music to another generation, through parents who will play this new CD and hopefully pass it on to another generation.”

The new recording brought together a range of expertise, including Dr. Meghan Forsyth, MMaP’s project co-ordinator, who wrote the song notes, and Dr. Holly Everett, associate professor, Department of Folklore, who wrote liner notes with the help of research gathered by her graduate student, Mahdi Khaksar.

“I am very honoured that we’re being recognized in the academic field.” — Fergus O’Byrne

For Mr. O’Bryne, putting the old recordings together for What a Time! Volume 2 has led to something new.

“It’s a whole new take on what the band and the music were about all those years ago. I am very honoured that we’re being recognized in the academic field.”