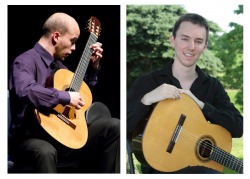 The School of Music is thrilled to announce that our guitar alumni swept the awards at the 2015 Montreal International Guitar Festival held in April at Concordia University.  The competition attracts guitarists from around the world.

Steve Cowan (pictured left) took 1st place at the competition and receives a cash prize, a free video shoot, and concert engagements at the 2016 Montreal Guitar Festival, and in Ontario through the Guitar Society of Toronto.   Cowan, who graduated with the Bachelor of Music from MUN in 2010, is currently studying for his doctor of musical arts degree at McGill University.  This is his third national or international competition win.

Adam Batstone (pictured right), who graduated from the Bachelor of Music degree program in 2011, took second place. He is currently studying for his DMA at University of Toronto and has recently been selected to record a full video guitar duo recital for CBC which will be posted online in August as part of the CBC young artist award. The program will include many original arrangements including Scarlatti, Couperin and Chopin as well as a selection of Brazilian works. Adam was also the 1st prize winner of the 2014 Hamilton International Guitar Competition last June.

Sylvie Proulx, professor of guitar at the School of Music said that, "I am delighted to have played a role in the development of these extraordinary musicians and wish them the very best in the years ahead".

Cowan, a native Newfoundlander who is currently working on recording a CD of Canadian guitar music, has credited Memorial’s School of Music with defining his musical direction.  “I entered the School of Music as a nervous rock musician and left as a confident classical artist headed straight for New York.  The mentorship and inspiration provided by the musical community at Memorial helped me find my true calling.”