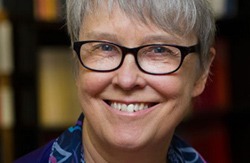 Dr Diamond joined five other retired faculty who were recognized as professores emeriti on Thursday 20th October at convocation. A professor emeritus or emerita is a retired member of the faculty who has served at least 10 years as a regular full-time faculty member and held the rank of professor upon retirement. The prime criterion for nomination is a sustained and superlative record as a scholar, as a teacher or as an academic administrator or any combination of these.

Candidates for the rank of professor emeritus/emerita are nominated by their academic units and, as with candidates for honorary degrees, the nominations are then reviewed by the Senate’s Committee on Honorary Degrees and Ceremonial. The candidates are approved by the university’s Senate and Board of Regents.

Dr. Beverley Diamond was the first Canada Research Chair in Ethnomusicology at Memorial University where she established and directed the Research Centre for the Study of Music, Media, and Place (MMaP) from 2003-15. She retired in 2015.

In collaboration with communities in Newfoundland and Labrador, as well as other parts of Canada, she published the Back on Track CD series that made archival material available together with extensive documentation. She also organized many symposia, concerts and international conferences.

Dr. Diamond is known for her research on gender issues, Canadian historiography, and Indigenous music cultures. Her research on Indigenous music has ranged from studies of traditional Inuit and First Nations song traditions and Sami joik, to Indigenous audio recording, traditional protocols for access and ownership, and, most recently, expressive culture in relation to the Truth and Reconciliation Commission on residential schools in Canada. Most recently she co-edited Aboriginal Music in Contemporary Canada. Echoes and Exchanges (McGill-Queen’s University Press, 2012) which received a Choice Academic Book award. Among her other publications are Native American Music in Eastern North America and Music and Gender.

In recognition of her work, Dr. Diamond received the Social Sciences and Humanities Research Council (SSHRC) Gold Medal in 2014, Canada’s highest prize for achievement in the humanities and social sciences. The recognition included a prize of $100,000. She received the prestigious Trudeau Fellowship in 2009 and was named to the Order of Canada in 2013.