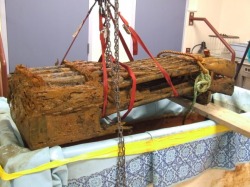 Over the past few years, conservators in the Department of Archaeology have been working to preserve a crate of 19th century British Enfield rifles dredged from the Grand Banks in 2011.

Since their discovery, Conservator Donna Teasdale has used the specialist facilties housed at the Conservation Laboratory to reveal and stabilise the rifles which have spent over 150 years underwater.