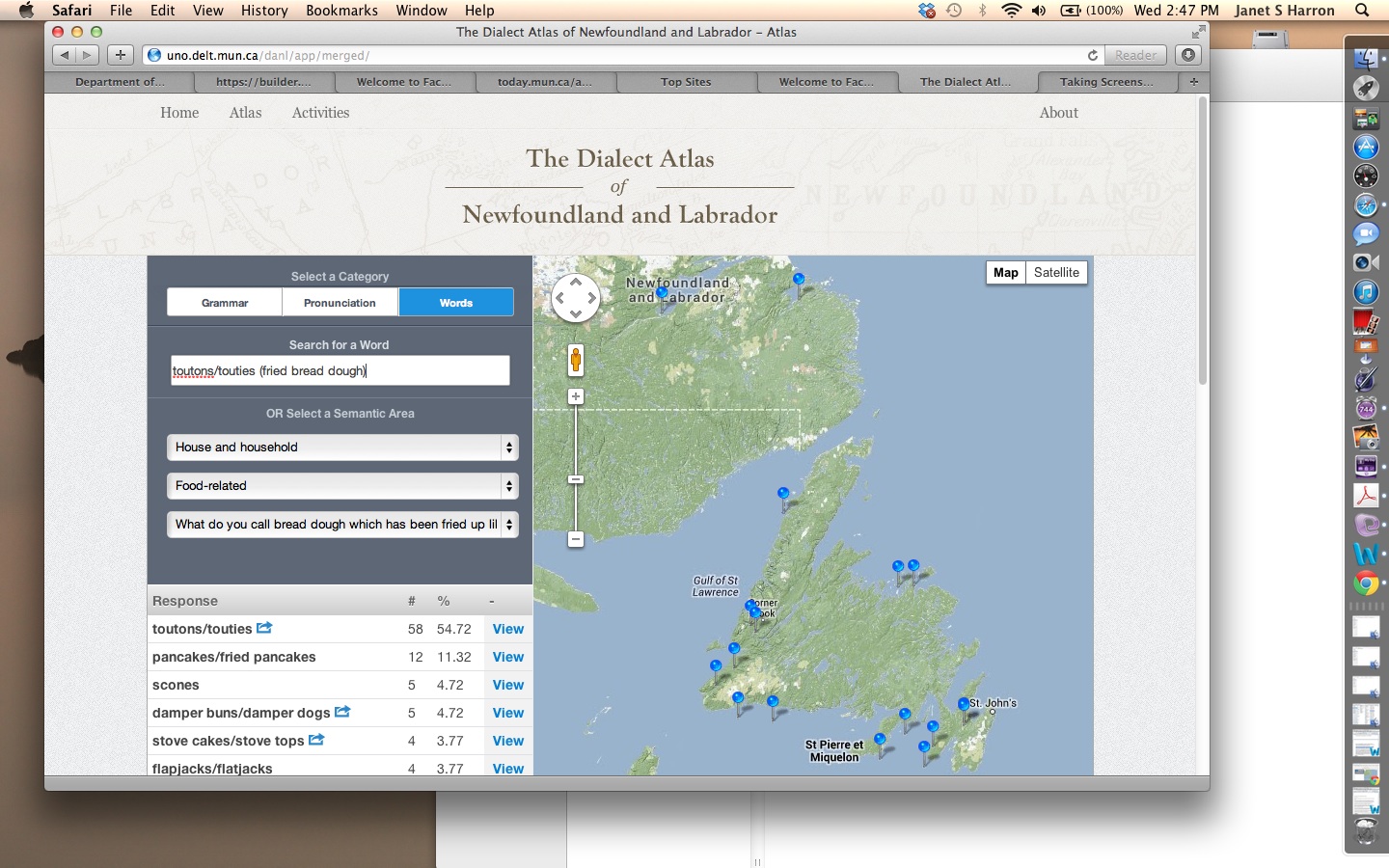 Newfoundland and Labrador dialects are known worldwide for their distinctiveness and regional diversity.

The launch will take place Wednesday, Oct. 23, from 4-6 p.m. at The Landing, University Centre. All are welcome to attend and discover Newfoundland and Labrador’s first dialect atlas.

The Dialect Atlas of Newfoundland and Labrador is one of only a handful of online regional dialect atlases in the English-speaking world, according to the project’s chief investigator Dr. Sandra Clarke.

“We’ve used state-of-the-art digital technologies, provided by the team at Distance Education, Learning and Teaching Support (DELTS) and ccwebworks, to create a genuinely interactive web 2.0 format, to which residents of the province can contribute,” said Dr. Clarke, whose team used data originally assembled between 1974 and 1982 by Dr. Harold Paddock for the project.

Dr. Philip Hiscock of the Department of Folklore is co-director of the project and envisions heritage groups, students and dialect researchers all taking advantage of the technology. He considers the project to be both academically meaningful and publically accessible.

“The dialect atlas will be a wonderful learning – and teaching – tool.  I don’t think it’ll be a dry-bones sort of thing,” he said. “I can imagine people having convivial arguments over local language, using the online dialect atlas, at the supper table!”

A screen capture from the Dialect Atlas of Newfoundland and Labrador.

The atlas allows users to search three sections.  The word section explores regional vocabulary and is based on fieldwork carried out in 1982, which involved the administration of an extensive lexical questionnaire in 20 different communities across Newfoundland and Labrador.

The pronunciation section shows the regional distribution of 31 local features (e.g. fine pronounced as vine) that appear with audio clips from original fieldwork. The grammar section shows regional distribution of 27 features (e.g. the use of ‘in for him). Glossary entries and information on each pronunciation and grammatical features are also provided. In addition, users can contribute speech forms from their own communities and are strongly encouraged to do so.

The dialect atlas also includes three online games. Word Jiggin’ is a timed word scramble. Say What offers the opportunity to transcribe original audio recordings. Users can create their own poetry using phrases and terms from the atlas in the final game, Off the Top of My Head.

The uniqueness of the English language on the island of Newfoundland stems from European settlers who arrived between the 17th and 19th centuries, primarily from the southwest and west of England, and the southeastern corner of Ireland. This first wave of immigrants was followed by Scots and Acadian French who settled the island’s southern west coast. In Labrador the Aboriginal Innu and Inuit population base was expanded in the late 19th and early 20th centuries by small numbers of European settlers, largely from the same geographic sources. These immigration patterns, along with the province’s historically largely rural population and isolated geographic location, have preserved many older speech features that have declined in other regions.

The Dialect Atlas of Newfoundland and Labrador is a project of Memorial University’s English Language Research Centre, using the expertise of DELTS in online and technology-enabled learning and ccwebworks to develop the interactive platform. The work is supported by a generous grant from the Social Sciences Research Council of Canada (SSHRC).