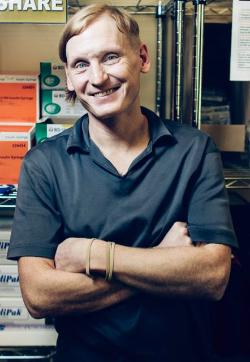 “The nervous system is not contained within the body's limits. The circuit from sense-perception to motor response begins and ends in the world. The brain is thus not an isolable anatomical body, but part of a system that passes through the person and her or his (culturally specific, historically transient) environment. As the source of stimuli and the arena for motor response, the external world must be included to complete the sensory circuit…”

Christopher has over 10 years’ experience working in ‘mental health’ and ‘addiction’ – his established area of research emphasis – in academic, community-based, and professional (government) research consulting capacities, from Canada, to the U.S., to Australia. Given these commitments, Christopher consistently attempts to situate People who Use Drugs (PUD) as ‘experts’ by working in direct collaboration with PUD, foregrounding their voices, perspectives and experiential knowledge. From this perspective, Christopher’s work regarding substance use, harm reduction, and the increasing recognition, power, and momentum of groups by and for PUD, belongs to the emergent interdisciplinary field of Critical Drug Studies.

Teaching: Despite the militant policing of Social Work’s fundamentally interdisciplinary borders as a ‘Professional’, ‘Practice-Based’ discipline, given his interdisciplinary, theoretically-driven, research-intensive training, Christopher brings diverse interdisciplinary theories and methods to bear on Social Work. Here, Christopher’s teaching integrates relevant theories and methods from Public Health, Sociology, Anthropology, and Cultural Studies. As an anarchist, Christopher’s teaching practice is rooted in the interdependent, mutually constituting relationship between teaching, research, and public engagement, where he attempts to close the perceived divide between the university and the community, academia and everyday life.

Supervision: Given his experience supervising projects on harm reduction and People Living with HIV/AIDS, social and health services for trans and gender fluid individuals, housing issues among aging PUD, the biopolitics of methadone maintenance treatment, and overdose prevention initiatives in Canadian correctional institutions, Christopher is eager to work with Masters or Ph.D. students interested in virtually any facet of substance use, mental health and/or related issues.

Research: Christopher’s current research includes: (1) serving as the Newfoundland and Labrador-based Principal Investigator for a federal Public Health Agency of Canada  investigation regarding risk behavior among People who Inject Drugs; (2) acting as a member of the National Advisory Committee and the Education Working Group for a federally funded Health Professional Education collaboration between Social Work, Nursing, and Pharmacy regulatory bodies, entitled Empowering the next generation of health care and social service professionals with knowledge, skills, tools and supports to address substance use issues in Canada, and (3) critically investigating the role and importance of substance use education in Social Work curriculum across Canada. In the coming years, Christopher aims to submit a major grant proposal based on a comparative, international, research-driven project concerning organizations established by and for PUD.

Publications: Christopher has been involved in publishing two separate books, including a sole-authored book entitled Addiction, Modernity, and the City (Routledge), and a collection of essays co-edited with Dr. Zack Marshall (McGill) entitled Critical Approaches to Harm Reduction. See below for a complete list of Christopher’s publications. Please do not hesitate to contact Christopher directly, either by phone or email (above).

Smith, C.B.R. (2016). Direct Action and Drug-Related Harm: Affinity-Based Tactics in the Founding and Development of the North American Harm Reduction Movement. The Scientific Pages of Addiction and Rehabilitation, 1(1), 1-10.

Smith, C.B.R. (2016). ‘About nothing without us’: A comparative analysis of autonomous organizing and activism among people with lived experience of illicit substance use and psychiatrization in Canada. Intersectionalities: A Global Journal of Social Work Analysis, Research, Polity, and Practice (Special Issue: ‘Mad Studies: Intersections with Disability Studies, Social Work and Mental Health’), 5(2), 82-109.

Smith, C.B.R. (2011). The intoxication of narcotic modernity: Cyborg subjectivity, urban space and the media/technology of substance. Journal of Transgressive Culture, 1(1), 47-84.

Smith, C.B.R. (2010). Socio-spatial stigmatization and the contested space of addiction treatment: Remapping strategies of opposition to the disorder of drugs. Social Science & Medicine, 70(6), 859-866.