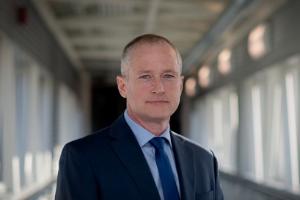 Dr. Travis Fridgen has been a faculty member at Memorial since 2005. He previously held the role of associate dean (undergraduate and administration) in the Faculty of Science and was the head of the Department of Chemistry.

He is a physical chemist whose NSERC-funded research involves the investigation of the structure, energetics and reactions of biologically relevant ions in the gas-phase. He has previously received both the Faculty of Science Distinguished Teacher Award and the President’s Award for Distinguished Teaching.

Dr. Fridgen has contributed to chemistry education across Canada as a co-author of a widely-used first year post-secondary chemistry textbook. Before coming to Memorial, he taught at Laurier and the University of Waterloo. He holds a B.Sc. in chemistry from Trent University, and a B.Ed. and PhD from Queen’s University.