Early days begin in 1954 with Atomic and Molecular Physics

Dr. S.W. Breckon was appointed as the first Head of the Department of Physics in 1954. Research within the department commenced in 1955 in the former Memorial College located on Parade Street and the first research grant from the National Research Council was awarded to Dr. L. Krause for a project on "energy transfer in molecular collisions." Drs. C.W. Cho and J.L. Hunt subsequently established a molecular spectroscopy program involving the spectra of nitric oxide and induced spectra of molecular chlorine. The university moved from Parade Street to the present campus in 1961. 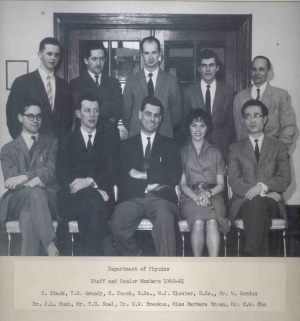 Following the recommendation of a special committee of the National Research Council in 1961, the university invited in 1963 a geophysicist Dr. E.R. Deutsch to join the Physics Department for the establishment of a research group in geophysics. Research was also undertaken in atmosphere electricity, collision-induced infrared absorption, electronic spectroscopy of simple neutral molecules and molecular ions, gamma-ray spectroscopy, and nuclear detectors. Theoretical research in several areas of physics and geophysics was also initiated.

The department has offered a full-range of undergraduate physics courses and an M.Sc. program since the inception of graduate studies at Memorial in 1960. Its first PhD program was created in 1969 and now offers PhD programs in atomic and molecular physics, condensed matter physics and physical oceanography.