The origin of Memorial's Faculty of Nursing dates back to August, 1963, when the Association of Registered Nurses of Newfoundland submitted a brief to the university calling for the establishment of a baccalaureate degree program.

Two years later a Department of Nursing was formed within the Faculty of Arts, and in August 1965 Joyce Nevitt was appointed director.

A year later, September 1966, the first 38 students were admitted to the undergraduate degree programs for generic and post-RN students. At this time there were just three faculty members, Nell Joiner, Anne Turner, and Pearl Strong. In the spring of 1967 the faculty doubled when Elizabeth Summers, Anita Basu and Purnima Sen joined. A part-time assistant, Ruby Dewling, was appointed to supervise students in laboratory work. 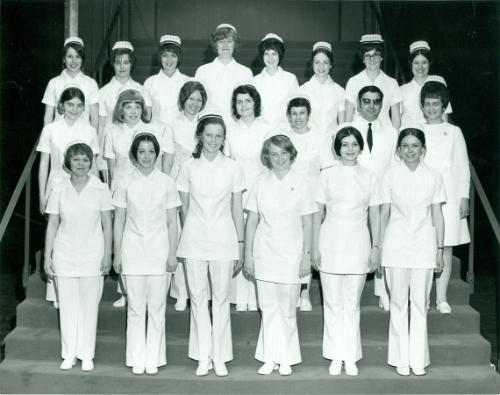 In 1970 the School of Nursing moved into one room in the temporary buildings. It contained desks at the front and a bed at the back for practice of skills. These temporary quarters served as classroom, reading room, lunch room, and learning laboratory.

The move to a permanent home began in the summer of 1978 when the School of Nursing administration offices moved to the first floor of the Health Sciences Centre.

The Faculty has 100 full-time/part-time students in the master of nursing (MN) program, and in September 2013 admitted the first students into a PhD in nursing program.

In late 2018 the school became a Faculty of Nursing, reflecting growth over the years to include masters and PhD programs, along with an emphasis on nursing research and public engagement.

In 2019 the faculty admitted students into an Accelerated Option (AO), a three-year option of the BN program. Applications are no longer being accepted for the FT option, and the final class of FT students graduate in the fall of 2020.