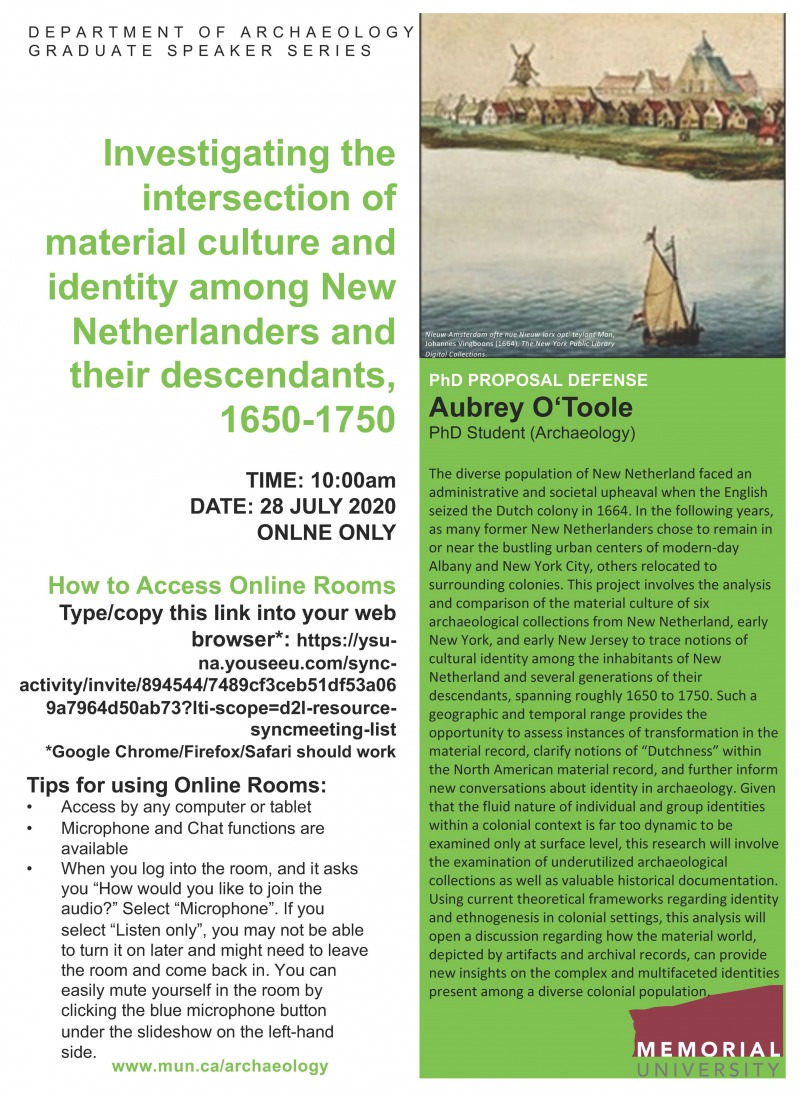 Aubrey O'Toole will be defending her PhD proposal, 'Investigating the intersection of material culture and identity among New Netherlanders and their descendants, 1650-1750', on Tuesday, July 28th at 10:00am.

Everyone is welcome to attend.

This will be a virtual proposal defence using the Online Rooms of Brightspace, and the link to the Online Room is here: https://ysu-na.youseeu.com/sync-activity/invite/894544/7489cf3ceb51df53a069a7964d50ab73?lti-scope=d2l-resource-syncmeeting-list

Aubrey outlines her research, "The diverse population of New Netherland faced an administrative and societal upheaval when the English seized the Dutch colony in 1664. In the following years, as many former New Netherlanders chose to remain in or near the bustling urban centers of modern-day Albany and New York City, others relocated to surrounding colonies. This project involves the analysis and comparison of the material culture of six archaeological collections from New Netherland, early New York, and early New Jersey to trace notions of cultural identity among the inhabitants of New Netherland and several generations of their descendants, spanning roughly 1650 to 1750. Such a geographic and temporal range provides the opportunity to assess instances of transformation in the material record, clarify notions of “Dutchness” within the North American material record, and further inform new conversations about identity in archaeology. Given that the fluid nature of individual and group identities within a colonial context is far too dynamic to be examined only at surface level, this research will involve the examination of underutilized archaeological collections as well as valuable historical documentation. Using current theoretical frameworks regarding identity and ethnogenesis in colonial settings, this analysis will open a discussion regarding how the material world, depicted by artifacts and archival records, can provide new insights on the complex and multifaceted identities present among a diverse colonial population."