Investigating the genetic prehistory of the New World Arctic 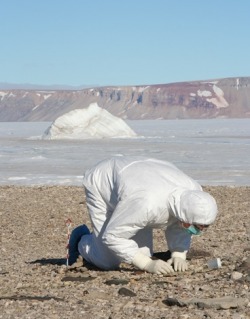 Investigating the genetic prehistory of the New World Arctic

Members of the Department of Archaeology, Dr. Vaughan Grimes and the late Prof. Priscilla Renouf, were among an international team of researchers who co-authored a recent article in the prestigious journal Science investigating the genetics of prehistoric Arctic populations.

This large-scale ancient DNA study utilized 169 samples of human remains from archaeological sites across the Arctic (Siberia to Greenland), which included the remains of Middle Dorset people who occupied Newfoundland (~2800-1000 years BP). This study has effectively demonstrated that the Dorset people were part of a genetically isolated but continuous population across the Canadian Arctic, and it has set the stage for the development of new and exciting research in Arctic archaeology.

The ground-breaking research has been extensively covered through a number of international news agencies: