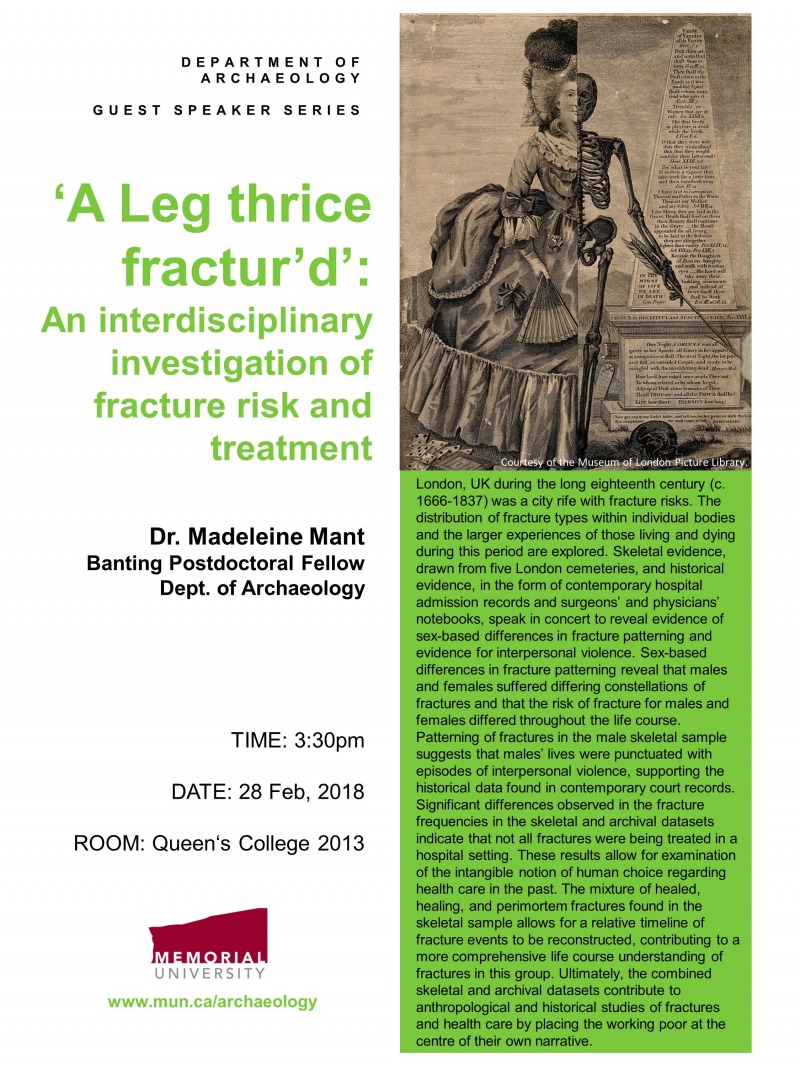 On 28 February at 3:30pm in QC 2013, Dr. Madeleine Mant, Banting Postdoctoral Fellow in the Dept. of Archaeology at MUN will be giving a talk entitled, ‘A Leg thrice fractur’d’: An interdisciplinary investigation of fracture risk and treatment.

As Dr. Mant describes, "London, UK during the long eighteenth century (c. 1666-1837) was a city rife with fracture risks. The distribution of fracture types within individual bodies and the larger experiences of those living and dying during this period are explored. Skeletal evidence, drawn from five London cemeteries, and historical evidence, in the form of contemporary hospital admission records and surgeons’ and physicians’ notebooks, speak in concert to reveal evidence of sex-based differences in fracture patterning and evidence for interpersonal violence. Sex-based differences in fracture patterning reveal that males and females suffered differing constellations of fractures and that the risk of fracture for males and females differed throughout the life course. Patterning of fractures in the male skeletal sample suggests that males’ lives were punctuated with episodes of interpersonal violence, supporting the historical data found in contemporary court records. Significant differences observed in the fracture frequencies in the skeletal and archival datasets indicate that not all fractures were being treated in a hospital setting. These results allow for examination of the intangible notion of human choice regarding health care in the past. The mixture of healed, healing, and perimortem fractures found in the skeletal sample allows for a relative timeline of fracture events to be reconstructed, contributing to a more comprehensive life course understanding of fractures in this group. Ultimately, the combined skeletal and archival datasets contribute to anthropological and historical studies of fractures and health care by placing the working poor at the centre of their own narrative."

Everyone is welcome to attend!