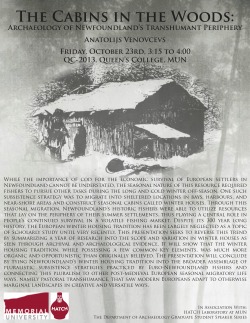 On Friday, October 23rd from 3:15-4pm in QC-2013, Anatolijs Venovcevs will discuss the results of his MA research: "The Cabins in the Woods: Archaeology of Newfoundland's Transhumant Periphery."

While the importance of cod for the economic survival of European settlers in
Newfoundland cannot be understated, the seasonal nature of this resource required
fishers to pursue other tasks during the long and cold winter off-season. One such
subsistence strategy was to migrate into sheltered locations in bays, harbours, and
near-shore areas and construct seasonal cabins called winter houses. Through this
seasonal migration, Newfoundland’s historic fishers were able to utilize resources that lay on the periphery of their summer settlements, thus playing a central role in people’s continued survival in a volatile fishing market. Despite its 300 year long history, the European winter housing tradition has been largely neglected as a topic of scholarly study until very recently. This presentation seeks to reverse this trend
by summarizing a year of research into the scope and variation in winter houses as
seen through archival and archaeological evidence. It will show that the winter
housing tradition, while possessing a few common key elements, was much more
organic and opportunistic than originally believed. The presentation will conclude
by tying Newfoundland’s winter housing tradition into the broader assemblage of
pluralistic subsistence strategies practiced by Euro-Newfoundland fishers and
connecting this pluralism to other post-medieval European seasonal migratory life
ways, namely pastoral transhumance, that saw modern Europeans adapt to otherwise
marginal landscapes in creative and versatile ways.