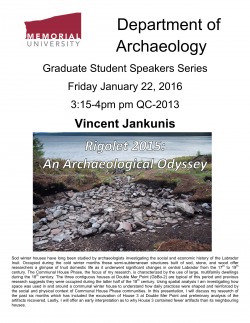 On Friday, January 22nd from 3:15-4pm in QC-2013, Vincent Jankunis will discuss the preliminary results of his M.A. research: "Rigolet 2015: An Archaeological Odyssey".

Sod winter houses have long been studied by archaeologists investigating the social and economic history of the Labrador Inuit. Occupied during the cold winter months these semi-subterranean structures built of sod, stone, and wood offer researchers a glimpse of Inuit domestic life as it underwent significant changes in central Labrador from the 17th to 19th century. The Communal House Phase, the focus of my research, is characterized by the use of large, multifamily dwellings during the 18th century. The three contiguous houses at Double Mer Point (GbBo-2) are typical of this period and previous research suggests they were occupied during the latter half of the 18th century. Using spatial analysis I am investigating how space was used in and around a communal winter house to understand how daily practices were shaped and reinforced by the social and physical context of Communal House Phase communities. In this presentation, I will discuss my research of the past six months which has included the excavation of House 3 at Double Mer Point and preliminary analysis of the artifacts recovered. Lastly, I will offer an early interpretation as to why House 3 contained fewer artifacts than its neighbouring houses.