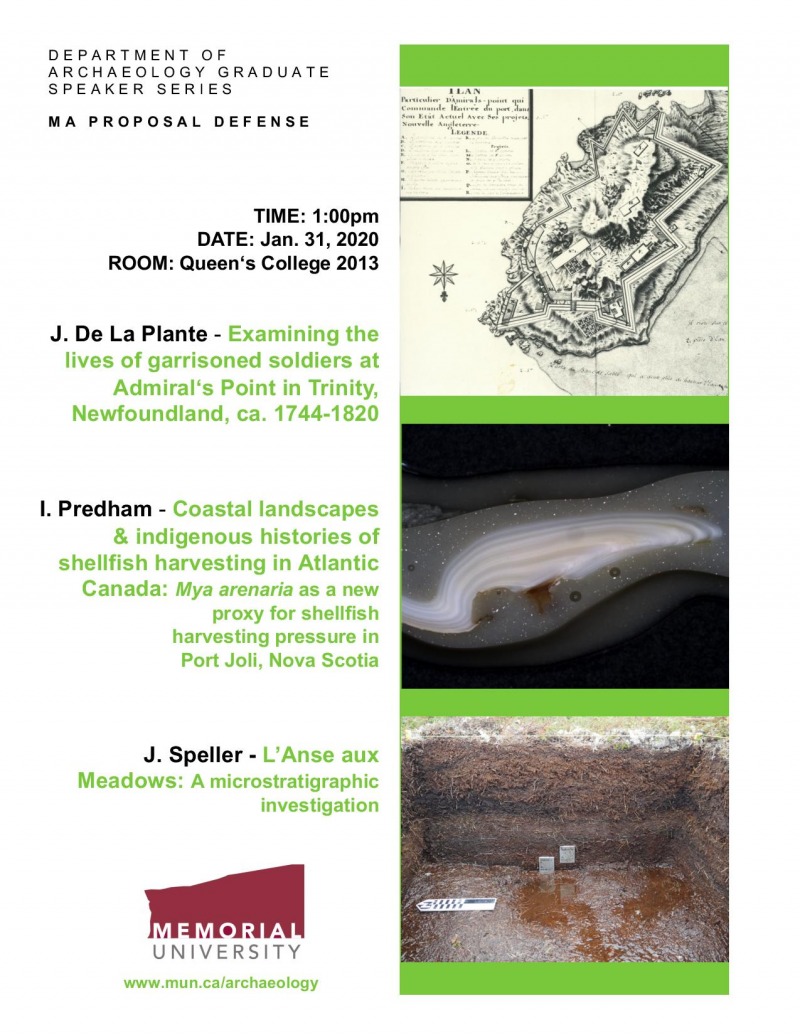 All are welcome to attend.

As Jake explains: "My research will investigate the Admiral’s Point site, located in Trinity NL. The site was built in the 1740s, to protect the community from French attack. However, in 1762, the site was captured and destroyed by a French force. The site was then rebuilt in the following years, and played a role in the defence of Newfoundland during the American War of Independence, and the War of 1812. This site was occupied by British forces, as well as members of the Trinity Militia during the latter occupation, and for a very brief period in 1762, the French. My research will focus on the artifacts uncovered in previous excavations of the site (Albert Bartovics in 1969/70 and Roy Skanes in 1994 and 1995), all of which have not been analysed. Additionally, I will be mapping the site using a drone to generate a photo map of the remaining fortifications. I am also intending to create a series of virtual reality compatible 360 degree photographs of the site, as a reference, as well as a unique visual aspect of the project.

Research questions include, what was life like for soldiers in Newfoundland at this time, and how did they live? What role did they play in the local community, and what roll did the community play in the garrison? What type of material culture was present at this site, and how does this show the sites connection to the rest of the world? Additionally, I will be comparing this site to similar sites in NL, in order to provide context, as well as understanding potential trends or similarities. This study will expand on our current knowledge of Newfoundland’s military history, as well as providing photo maps for future study and site management, and unique visuals and resources to showcase this site."

Ian explains his research focus: "Situated in the traditional territory of the Mi’kmaq First Nations Port Joli, this research interprets the long-term history of shellfish harvesting from two shell middens in Port Joli Harbour, Nova Scotia (1550–1300 cal B.P.). Using high-resolution sclerochronology of marine bivalves, this research addresses questions pertaining to seasonality and shellfish harvesting pressure to understand past coastal populations environmental interactions in Atlantic Canada. Sclerochronology is reliable way to measure the ontogenetic age of harvested shellfish, and by comparing data from multiple shell midden sites, relative levels of harvest pressure can be determined. Marine bivalves from shell middens are ideal for studying both environmental changes and cultural practices, as the internal growth structures within the shell can be used to assess changes in growth rate and harvest pressures over time. This research will use sclerochronological analysis to determine local harvesting pressures and seasonal patterns of shellfish harvesting in Port Joli Harbor, Nova Scotia. By interpreting relative rates of harvest pressure, this project will examine how past indigenous populations in Nova Scotia were actively managing shellfish resources, and how shellfish were integrated into past subsistence economies."

Jeffrey outlines his research: "This project will apply a geoarchaeological
approach using micromorphology (soil thin section analysis) to the study of an archaeological layer discovered in a peat bog at the site of L’Anse aux Meadows in Northern Newfoundland. Dating of the layer indicates that it is likely Indigenous in origin. Micromorphology can be used to discern depositional- and post-depositional processes. It will be applied here to understand: (i) how the layer and the bog area were formed and transformed by human and natural processes; (ii) what this implies about the usage of the area and preservation conditions in the bog; (iii) how the layer relates to the broader cultural occupation sequence at the site, including both its Norse and Indigenous dimensions."