Caring for the Seals

Caring for marine mammals requires a lot of commitment and care. Here at the OSC the seals basic needs are met and thensome. Below is a look into what a typical day at the seal facility might consist of. 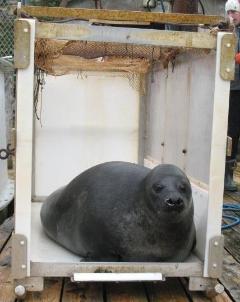 Caring for animals under human care is known as animal husbandry. The seals are provided with care 365 days a year. They are checked routinely throughout the day for any abnormalities and if needed vet staff is called in for a checkup. Their blood is taken every couple of months and sent to the vet for processing to ensure they are healthy. They are fed once a day in the winter and 2-3 times a day during the summer when training sessions take place. The seals weights are taken on a weekly basis. Keeping a record of their weights helps us decide if the seals food weight needs to be adjusted.

The tanks are drained once a week and scrubbed clean. Cleaning of the enclosure is important in maintaining the seals health. It prevents the growth and spread of bacteria.  All three tanks are supplied with a continuous flow of ambient saltwater from Logy Bay via a flow through system and daily water temperatures are taken to monitor trends. The seals are regularly provided with environmental enrichment.

Enrichment is defined as any stimulus new and exciting to an animal’s environment that provokes an animals response. It helps keep an animal mentally stimulated and physically active. Enrichment can be many things. Some of our enrichment practices at the OSC include toys (fish ball), human-seal interaction, training (match to sample), and head game. 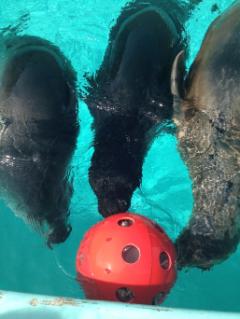 Fish Ball: A fish ball is a round ball with holes that is stuffed with capelin and frozen. The seals are given fish balls twice a week. Once placed in the pool with the most seals it thaws allowing the seals to extract the capelin. Once the ball is empty it is left in the pool for the seals to play with. 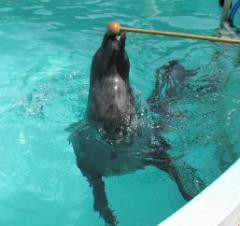 Training: The seals at the Ocean Sciences Centre are trained to perform a number of behaviours for husbandry and research purposes. Training began with a simple action known as stationing. Seals place their nose on a ball located at the end of a baton. When done correctly a reward (a piece of fish) is given. This is positive reinforcement. Now, when the seals see the baton they associate it with a reward. The trainers can 'station' the seals around the enclosure or in and out of the pools using the baton.

The act of stationing was later paired with the sound of an Acme dog whistle. This associates the sound of the whistle with a positive reward.

During head game the seals are placed in the same tank and tossed thinly sliced pieces of herring. The objective of the game is to throw each piece of fish into the tank so that each seal has an equal opportunity to eat it. It encourages competition and allows the seals a chance to be physically active.

Back to Seal Facility