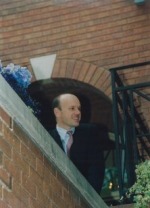 Philosophy undergraduates at Memorial are the beneficiaries of a generous scholarship, endowed at over $80,000, that was established in memory of James A. Good, whose life was cut short by illness in 2005.

Born and brought up in St. John’s, Mr. Good was an extremely proud Newfoundlander. He completed an undergraduate degree in philosophy at Memorial University. “Jim struggled to put himself through university and did so with distinction, going on to get a master’s degree at Dalhousie and to PhD studies at the University of Toronto,” noted his wife, Mary Symons.

It was during his doctoral studies that Mr. Good was persuaded by the Honourable Dr. John C. Crosbie to join his team in Ottawa. In the 1980s, Mr. Good served as Chief of Staff to Dr. Crosbie, who held federal ministerial portfolios such as Justice, Transport, Finance, International Trade and Fisheries.

In his tribute to Mr. Good, which was reprinted in the Globe and Mail (Nov. 27, 2005), Dr. Crosbie, now Memorial’s Chancellor, said: “In the 11 years I worked with Jim, I discovered he had the ability to grow, the ability to learn and keep learning, to see beyond the obvious, to disagree and express his disagreement....”

In 1990, Mr. Good left government service to embark on a new career. He became a successful investment banker and a partner of Capital Canada Limited in Toronto.

“Although he excelled at careers that took him into the fields of government and Toronto’s Bay Street financial world, he always loved the study of philosophy and continued to read voraciously and to discuss and debate the works of great philosophers and philosophical issues all of his life,” recalls Ms. Symons. “Jim realized the value and the firm foundation that a university education can provide. He also knew the value of the resources students need to get that education.”

The endowment for the scholarship fund, established last fall, grew quickly thanks to a significant gift from the Eric Baker Family Foundation, and contributions from many friends and colleagues who wished to remember Mr. Good in this way.

Ms. Symons notes that it was Mr. Good’s wish that the scholarship be awarded to a Memorial University undergraduate student. “Despite his own struggles as an undergraduate, it was during this time that he realized he wanted to pursue post-graduate work. This scholarship may help other young philosophy students realize their goals through further education.”

The James A. Good Scholarship in Philosophy will be awarded annually to one student who excels in philosophy studies; financial need will be taken into consideration. The decision will be made on the recommendation of the head of the philosophy department, with the approval of the Senate Committee on Undergraduate Scholarships.