The publications programme is mandated to publish significant works on folkloristics, especially those relevant to Canada, particularly Newfoundland & Labrador, which will promote folklore as a discipline to an academic and popular audience. 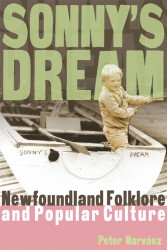 Ballads and Sea Songs of Newfoundland. Collected and edited by Elisabeth Bristol Greenleaf. Music recorded in the field by Grace Yarrow Mansfield. 2004. xxxii + xliv, 395 pp. pbk. ($45.00).
[A facsimile of the 1933 edition with the foreword to the 1968 edition by MacEdward Leach and a new foreword by Neil V. Rosenberg and Anna Kearney Guigné.] - Out of Print

Little Jack and other Newfoundland Folktales. 2002. xiii, 245 pp. pbk. ($24.95).
[A selection of narratives from Herbert Halpert and J.D.A. Widdowson's Folktales of Newfoundland (1996), re-transcribed by John Widdowson for a general audience.]

Devine's Folklore of Newfoundland in Old Words, Phrases and Expressions, Their Origin and Meaning. 1997. vi, 81 pp. pbk. ($8.95).
[A reprint of the 1937 edition with an introduction by Philip Hiscock.]

Gerald Thomas. The Tall Tale and Philippe D'Alcripe. An Analysis of the Tall Tale Genre with Particular Reference to Philippe D'Alcripe's La Nouvelle Fabrique des Excellents Traits de Vérité, together with an Annotated Translation of the Work. 1977. xv, 259 pp. pbk. ($8.20).
[This study of a sixteenth-century French collection includes a discussion of the tall tale in France and America and its relationships with other folklore genres.]

Gerald Thomas. Songs Sung by French Newfoundlanders, A Catalogue of the Holdings of the Memorial University of Newfoundland Folklore and Language Archive. 1978. ix, 93 pp. pbk. ($5.00).
[Lists 180 songs in 283 variants collected in francophone communities on Newfoundland's Port-au-Port peninsula (1971-1978). Provides Index of Titles, First Lines, and Index of Singers with Repertoires by Titles and First Lines.]