The speaker will explain how directed graphs are used to construct blocked and group-graded matrices. The approach is based on laying a foundation in directed graph theory. The talk includes background on directed graphs and blocked matrices. The directed graphs we consider have a finite number of vertices and no multiple arrows. Loops are allowed. The vertex set and the arrow set of a directed graph D are denoted by V( D) and A( D), respectively. If there are n vertices then we may assume they are numbered so that V( D) = {1,...,n} and A( D) is a subset of V( D) x V(D). We drop the parentheses and comma for any arrow (v,w) and denote it simply by vw.

We use undirected paths to formulate definitions of independence and spanning for sets of arrows. An independent spanning set of arrows is a basis. Many familiar basis properties are established. This is related to blocked and group-graded matrix algebras.
If ab is in A( D) then we let E_{ab} denote the standard unit matrix, that is, E_{ab} is the n x n matrix whose ab-entry is 1 and all of its other entries are 0. A matrix is blocked by D if it is a linear combination of standard matrix units which are indexed by arrows of D. If there is a function from a basis to an abelian group then it can be extended to the entire directed graph. This motivates studying functions from the basis of a directed graph to abelian groups. The homomorphism places a grading on a subalgebra of blocked matrices. We show that, in many cases, all gradings on the blocked matrix subalgebra are determined in this way.

Yuri Bahturin (MUN) "Filtrations and Distortion of Embeddings in Algebras"

Questions about nilpotency and about algebraicity in algebras are of
fundamental importance in the theory of non-commutative rings. In this
talk I will discuss some of these questions, beginning from the classical
problems of Koethe and Kurosh, and up to more recent developments and
open questions in the field. In particular, I will discuss some special
results for algebras over uncountable fields. 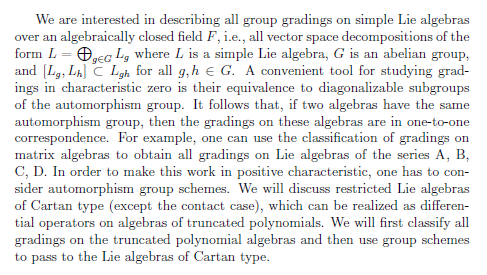 In their 1997 paper studying equivariant algebraic varieties, Goresky-Kottwitz-MacPherson observed that in a range of interesting examples, including toric varieties and flag manifolds, the calculation of equivariant cohomology reduces to analyzing an associated combinatorial object now called a GKM-graph. This is a graph whose vertices correspond to fixed points of the action, and whose edges are labeled by characters of the symmetry group. Their paper inspired a great deal of subsequent work, collectively known as "GKM theory", linking combinatorial algebra with equivariant topology. In two lectures aimed at non-experts, I will survey some of this theory.

The first lecture will be a gentle introduction to equivariant topology and equivariant cohomology, establishing some background and motivation.

The second lecture will be a survey of GKM theory including my recent work on GKM-sheaves over hypergraphs.

An AH-algebra is an inductive limit of homogeneous C*-algebras. This class of C*-algebras contains many naturally arising C*-algebras, for instance, UHF-algebras, irrational rotation algebras, and C*-algebra associated to certain minimal dynamical systems. The class of simple AH-algebras with a certain restriction on dimension growth were classified using the ordered K-group together with the pairing with the tracial simplex.
In this talk, I will give a review on this classification theorem.

August 3, 201 0
Petr Vojtechovsky (University of Denver) “A GAP Tutorial”
Abstract:
We'll present a short introduction to this programming language - Groups, Algorithms and Pro-gramming - with real-life examples from the worlds of loops and groups. This will be an informal interactive session accessible to everyone.
August 10, 2010
Hayk Melikyan (North Carolina Central University) “New Variations on the Theme of Maximal Subalgebras”
Abstract:
The description of maximal subsystems of any algebraic system is an essential and important step toward the structural characterization of the system. In Lie Theory there are a number of well-known problems where the maximal subsystems play a crucial role.
In this talk we will discuss results and problems related to the classification of maximal sub-algebras in simple Lie algebras (superalgebras) over the fields of positive characteristics (which includes the classical simple Lie algebras and algebras (superalgebras) of Cartan type), and in-finite dimensional Lie algebras of Cartan over the field of characteristic zero.