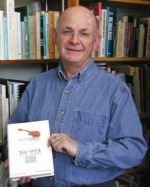 Originally from the western US, Rosenberg is Professor Emeritus of Folklore at Memorial University, where he taught from September 1968 until his retirement in September 2004. He has a BA in History from Oberlin College and the MA and PhD in Folklore from Indiana University.

Conducting research in Canada and the United States, he focused upon the lives and music of professional, semi-professional and amateur old-time, bluegrass, country and folk musicians. A performing musician since childhood, Rosenberg utilized his skills and experiences in bluegrass, country, folk, jazz, classical and experimental music to gain a closer understanding of the processes he studied.

His books include Bluegrass: A History (1985), which was reprinted with a new preface for its 20th Anniversary Edition in 2005. Other books include Transforming Tradition (1993), a collection of studies on folk music revivals; Bluegrass Odyssey: A Documentary in Pictures and Words (2001) co-authored with Library of Congress photographer Carl Fleischhauer; The Music of Bill Monroe (2007), co-authored with Charles K. Wolfe; and Bluegrass Generation: A Memoir (2018). He has published over seventy-five articles and review essays. In 1981 he originated the column "Thirty Years Ago This Month" which ran for twelve years in Bluegrass Unlimited.

Formerly Recorded Sound Reviews Editor of the Journal of American Folklore, he has edited and written notes for many recordings, including a contribution to the brochure for the Smithsonian/Folkways reissue of Harry Smith's Anthology of American Folk Music which won a 1997 Grammy Award.

Rosenberg is a Fellow of the American Folklore Society, recipient of the Marius Barbeau Medal for lifetime achievement from the Folklore Studies Association of Canada, and the only Canadian member of the Bluegrass Music Hall of Fame.

In 2004, Rosenberg's friends and colleagues honored him with a book of essays and articles, Bean Blossom to Bannerman: Odyssey of a Folklorist. Edited by Martin Lovelace, Peter Narváez and Diane Tye, this MUN Folklore and Language Publication includes his biography and a bibliography of his writings.