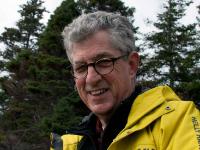 Pocius is also a Fellow of the Royal Society of Canada (RSC), considered to be the highest academic honour in Canada. In citing Dr. Pocius' accomplishments, the RSC refers to him as "English Canada's leading interpreter of ordinary objects." “By looking at how everyday things are used,” the society goes on to comment, Dr. Pocius, "has produced studies both sensitive and rigorous, earning him international standing as a scholar. While trained as a folklorist, he is a true interdisciplinarian."
Pocius has researched and written on topics ranging from joke-telling and pop music, to tract housing and religious popular prints. He has worked on many aspects of Newfoundland folklore and popular culture, publishing studies of belief, religion, medicine, narrative, and music. His specialty has been material culture, and he has published widely on gravestones, cemeteries, textiles, folk art, architecture, furniture, and cultural landscapes. While working primarily in Newfoundland and Labrador, he has also conducted fieldwork in other parts of Canada, the United States, Great Britain, France, and Lithuania.
His book on the landscapes and spaces of one Newfoundland community, A Place to Belong, won the prestigious Chicago Folklore Prize, and the Cummings Award from the Vernacular Architecture Forum in the U. S. His other books include Textile Traditions of Eastern Newfoundland, and A Field Guide to the Vernacular Architecture of St-Pierre et Miquelon. He has edited two books, Living in a Material World: Canadian and American Perspectives in Material Culture, and Directions in Canadian Architecture and published over seventy articles and book chapters. He has served on the editorial boards of Canadian Folklore canadien, New York Folklore, Australian Folklore, Journal of American Folklore, Home Cultures, and Journal of Modern Craft. For many years he was editor of the national Canadian journal, Material Culture Review.
Beginning in 2002, he worked extensively with UNESCO, the Government of Canada, and the Government of Newfoundland and Labrador on intangible cultural heritage issues. He prepared background and positions papers on intangible heritage for the Policy Branch of the Department of Canadian Heritage in 1998 and 2002. He represented Canada at a UNESCO experts meeting in Brazil in 2002, devoted to the drafting of UNESCO’s Convention on the Safeguarding of Intangible Cultural Heritage (2003). Between 2002 and 2010, he was a member of the Canadian Commission for UNESCO, working primarily on intangible cultural heritage issues. He taught the first courses on ICH in Canada for the University of Victoria’s Cultural Resource Management program in 2005 and 2006. He has been involved with advising the Government of Newfoundland and Labrador on ICH strategies; many of these are outlined in the new Cultural Policy Blueprint released by the province.
He has taught courses on material culture, vernacular architecture, medieval art and architecture, public sector folklore, museum studies, as well as courses in the English Cultural Landscape field program he organized at Memorial's Harlow Campus in Essex, England. He also established the Department of Folklore’s graduate field school in research methods, teaching the first three schools in Keels (2012), Quidi Vidi (2013) and Witless Bay (2014).
He is continuing his research on townscapes and architecture in Regency Newfoundland, mass-produced factory furniture, and intangible cultural heritage policy, as well as more recent projects on early twentieth century architectural fashions, and the mid-century ranch house.