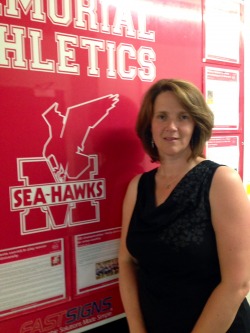 Dr. Murphy graduated with a bachelor of arts from Memorial in 1995 before going on to the University of North Carolina at Greensboro to complete a master of science (kinesiology) in 2003. She also has a doctoral degree in kinesiology with a specialization in sport psychology, including advanced courses in exercise physiology, nutrition, strength and energy system training, and sport program development, also from the University of North Carolina at Greensboro.

“Dr. Murphy has the perfect background for this job and her connections to Memorial and to our varsity athletics programs means she’s already invested,” said Dr. Heather Carnahan, dean of the School of Human Kinetics and Recreation, the home of Memorial’s varsity athletics programs. “She understands the different aspects of sport and I think this kind of diverse knowledge will bring the varsity program to a new level of success.”

“This is an exciting time of renewal for Sea-Hawks sport,” said Dr. Murphy. “Athletics makes an important contribution to Memorial and is a source of pride for the community. I look forward to working on campus and in the community to create an environment of excellence where student-athletes can find success in their sports, excel in the classroom and emerge as leaders.”

Dr. Murphy’s qualifications also include graduation from the National Coaching Institute, level 4 National Coaching Certification, head coach for Canada Games and provincial team programs, serving as a sport psychology consultant for the Newfoundland and Labrador Volleyball Association and she is a member of the Newfoundland and Labrador Volleyball elite development committee.

Dr. Murphy has received several coaching recognition awards, including the Reg Soper Memorial Award from the Newfoundland and Labrador Volleyball Association for dedication and outstanding work in the sport, Memorial University’s Dr. J.D. Eaton Coach of the Year Award for the women’s volleyball coaching staff in 2012-2013 and the 3M Atlantic University Athletic Association Female Coach of the Year recognizing excellence in coaching.