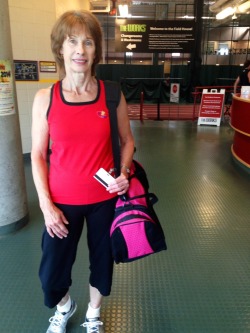 In the last few years, Donna Vey has been answering a certain question quite often. ‘When are you retiring?’ But she didn’t really see the need to retire. Even after 47 years at Memorial (the longest running employee so far), Donna liked her job and everything about it. But recently, Donna announced that she would be leaving Memorial as of Aug. 1.

Her secret to longevity? “There is really no secret. I was fortunate enough to secure a position at Memorial University and then wisely moved to the School of Human Kinetics and Recreation,” says Donna. “I enjoy my work and find it meaningful and rewarding. I’ve been blessed over the years with wonderful co-workers who have been very supportive and with whom I have formed close friendships. The atmosphere in HKR is unique; it’s very energetic and upbeat.”

There have obviously been many changes in the school in nearly five decades. “The biggest change I have seen in the school is the way it has grown from just a few dozen students and one degree program to today's offerings of recreation, physical education and kinesiology with co-op options and also a masters degree.”

“As one of the smaller faculties there’s closer interaction with the students. Many of whom I've met in later years and have shared fond memories with them,” Donna adds.

Every day, Donna can be seen heading to The Works on her lunch break for an aerobics or Pilates class. “Working in HKR has allowed me to do my lunchtime workout without leaving the building. So I guess you could say that my job gave me the chance to combine a lot of my mental, social and physical fitness needs.”

Stephen Dodge is the director of Human Resources at Memorial. “I would like to congratulate Donna on her upcoming retirement. According to our records, with 47 years of service, she is the university’s longest serving employee to date. This is quite an accomplishment that speaks to Donna’s dedication to her work. She will truly be missed by her colleagues in HKR and throughout Memorial.”

Donna was born in Long Beach, Trinity Bay. She graduated from Clarenville District Vocational School and also completed a diploma in business administration at Memorial.

Donna started her career with Memorial in 1967 as a clerk stenographer in the library and stayed for two years. She later moved to the Department of Physical Education (now the School of Human Kinetics and Recreation) for a secretarial position where she stayed. Donna’s last position in HKR was administrative staff specialist.

In her spare time, Donna volunteers at St. Patrick’s Mercy home as a member of the resident advocacy committee. In addition to her gym visits, she is part of a line-dancing group once a week. And like most retirees, travel is in Donna’s future. “I love to travel and plan to do more now that I have no time constraints. In fact I have already booked a cruise and will spend February and March in Florida.”