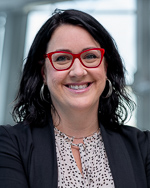 Dr. Bittner studies elections and voting in both Canadian and comparative contexts. In addition to her ongoing work on party leaders, she has published research on voter turnout, immigration, as well as the impact of social cleavages and political sophistication on political attitudes. She is currently working on projects in a number of areas, including voters' attitudes about immigration; the influence of gender on public opinion and voting; and Canadian parties and elections.

Melanee Thomas and Amanda Bittner, eds. 2017. Mothers and Others: The Impact of Family Life on Politics. Vancouver: University of British Columbia Press.