Grand Banks Natural Gas: A Source of Electricity for the Island of Newfoundland

As the debate over Muskrat Falls continues, many people in this province have questions about the potential of natural gas as an energy source.

Could natural gas be brought ashore to Newfoundland and used as fuel to generate electricity? Are there sufficient supplies of natural gas to meet the anticipated long-term energy demands on the Island? What are the approximate costs of constructing a pipeline from the Grand Banks to the Island, and of building and operating natural gas turbines? What are the barriers to bringing gas onshore?

Watch Dr. Stephen Bruneau, Assistant Professor of Engineering at Memorial University of Newfoundland, as he outlines the issues involved with bringing natural gas onshore, and join him in a moderated discussion session. 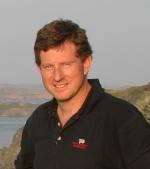 Dr. Steve Bruneau graduated from Memorial University’s civil engineering program in 1987 and later obtained an MESc in Industrial Aeronautics and Hydrodynamics from the University of Western Ontario. In 1992 he returned to Newfoundland to work at C-CORE, working on the iceberg design load for the Terra Nova floating production system. He obtained his PhD from Memorial University in 1996, when his doctoral thesis dealt with ice loads at the Confederation Bridge.

Steve was appointed regional manager of operations for North Atlantic Pipeline Partners in 1998. In this position, he managed the business affairs, research thrusts, marketing and other efforts for the development of a natural gas industry for Newfoundland. An interest in energy policy and in conventional and alternative generation led him to the consulting arena in which micro hydro power proposals and wind power experimentation became the focus of his work.

Steve joined Memorial University’s Faculty of Engineering and Applied Science in January 2006 as an assistant professor in civil engineering and focuses his R&D work in niche areas of ice, wind, hydro and energy disciplines as they relate to development in Newfoundland and Labrador. Recent consulting and business partnering have involved construction-related activities for the Voisey's Bay Nickel Project. Steve recently undertook time-lapse surveillance work in Newfoundland and Greenland for the Canadian Ice Services, involving the tracking and filming of iceberg deterioration for improved forecasting and mapping.

He is married with two children, is active in charity work, scouts, woodworking and photography and has published two books on icebergs.