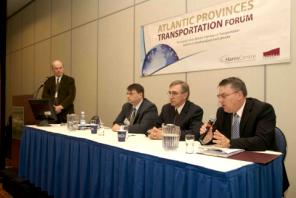 Climate Change and Renewable Resources in Labrador: Looking Toward 2050, March 11-13, 2008, North West River, Labrador
How is climate change expected to affect the ecosystem of Labrador, an ecosystem which supports the renewable resource-based economy and way of life of Labrador communities?

Energy from the Edge: Opportunities for Cooperation Around the North Atlantic Rim, September 12th-15th, 2007, Shetland Islands
This event brought together representatives from remote communities around the Nordic and North Atlantic Rim, in order to discuss key issues faced by geographically challenged regions and to outline solutions from and for communities at the periphery. The key themes of this conference included: large-scale resource development in remote communities, labour market mobility, prosperity through identity, governance, and sustainable energy.

Atlantic Provinces Transportation Forum, May 30, 2007
Holiday Inn, St. John's
The Atlantic Gateway proposal calls for a major transhipment port (or ports) to be located in the Atlantic Region for shipping to and from the Far East, Europe and other trade partners. Will this project be of benefit to Newfoundland and Labrador and what impact will it have on the Province’s transportation system?

The Community Prosperity Forum, April 24 and 25, 2007
Pepsi Centre in Corner Brook
Press release April 20, 2007
At a time when many national development strategies focus on big cities as the drivers of economic growth, this conference highlights the reality that the small and medium-sized municipalities of many provinces and other jurisdictions have a critical role to play as social and economic anchors for regional development. The four parallel themes for the conference include: economic development approaches; sustainable "green" planning and practices; managing urban-rural interaction; and the role of post-secondary institutions in development.

Symposium on Growing the Economy of Newfoundland and Labrador, October 4 and 5, 2004, Glenmill Inn, Corner Brook.

Innovation and Creativity in City Regions: Do We Have What it Takes to Compete February 2009, St. John's.