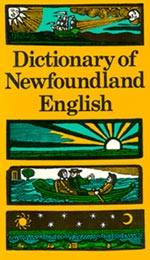 The Dictionary of Newfoundland English (DNE) is one of the most internationally acclaimed and best-known publications to emerge from the province. Scholars associated with Memorial University’s English Language Research Centre (ELRC) published the first edition of the DNE in 1982. They followed this up with a second edition in 1990 which contained a Supplement offering approximately 1,500 new words or expanded entries. Thousands of other words and citations did not make it into either the DNE or its Supplement, however; these are housed in the DNE collection at Memorial University’s Folklore and Language Archive (MUNFLA).

The DNE collection consists of approximately 77,000 word-files the editors of the DNE compiled while working on the publication. Each word-file contains an example of a local word in its actual usage, or a commentary on a word by the dictionary's editors and contributors. Some cards also show sketches and diagrams which help to define the word being investigated. About two thirds of these records are not represented in the published DNE entries and constitute an essential source for future studies of the grammar and lexicon of Newfoundland English.

Under the DNE Word-File Digitization Project, trained research assistants in the ELRC scanned the thousands of word-files and transcribed their contents into a searchable database. This data is now available on MUN’s Digital Archives (DAI) for researchers to enjoy; view the database here.