The gift of science 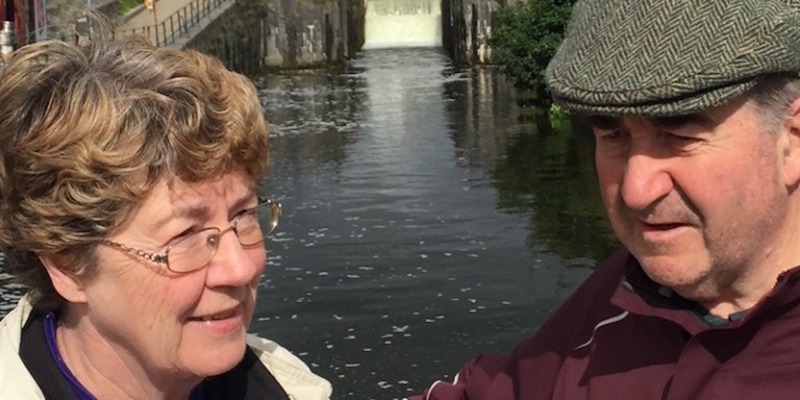 The gift of science

Dr. Seán Brosnan is retiring after 46 years with the Department of Biochemistry, Faculty of Science.

Widely respected by students and faculty alike, Dr. Brosnan has cemented his legacy as a researcher and educator. But, he has decided to take it a step further.

Dr. Brosnan is donating the majority of the lump-sum severance payment provided through Memorial’s Voluntary Retirement Program to create the Brosnan Lecture in Biochemistry Endowment Fund.

Born in Ireland, Dr. Brosnan completed his bachelor of science and master of science at University College, Cork. He then received his self-proclaimed “break of a lifetime”: acceptance into a PhD program at Oxford under a Nobel laureate supervisor.

He then went to Toronto for three years after that as a research fellow. It was there he met his wife, fellow Memorial faculty member and research partner, Dr. Margaret Brosnan.

“I had every intention of going back to Cork, but when Margaret and I got married, we made other plans. We looked around a few places in Canada and Memorial was the right fit. To be honest, there have been times when we thought of going elsewhere, but we love the community and we have done exceptionally well here. We have been continuously funded since 1972.”

In 2009 Dr. Brosnan was named to the Royal Society of Canada (RSC). The fellowship of the RSC includes 2,000 Canadian scholars, artists and scientists, chosen by their peers as the best in their field.

In 2012 the Brosnans together received the Danone Institute of Canada Distinguished Nutrition Leadership Award (DNLA) for making outstanding contributions to the discipline of nutrition.

In 2014 he was awarded the John Lewis Paton Distinguished University Professorship at Memorial, which recognizes those who distinguish themselves across the continuum of teaching and learning, research and public engagement. These are just a few of their many notable achievements.

Leaders in their field, the Brosnans have jointly published 66 papers in the areas of nutrition and metabolism.

“When we first came here we worked separately. Largely because it is important to get yourself established as a scientist in your own right,” said Dr. Brosnan.

“After 20 years, we decided that it would be better to work together. We have complementary expertise, I’m very much the biochemist and Margaret is more qualified in nutrition and physiology. And we’ve been married since 1970 . . . 48 years. So we’ll probably make it, I think.”

Deciding to give back

Earlier this year, Memorial University proposed a Voluntary Retirement Program (VRP) as one of the ways to address its budgetary challenges.

Offered in phases to approved academic and non-academic staff members, the retirement incentive is a lump sum payment of one month of salary per year of service, up to a maximum of 12 months. The program has a budget of $8 million and requires employees to retire on or before Dec. 31, 2018.

Dr. Brosnan was already thinking about retirement when he became aware of the VRP and decided to take part – but with a generous twist.

“This program gives me a lump sum and I thought, ‘Shouldn’t I do more than just take this money and run?’ I had given money to the university before for PhD students, so I decided I should give a significant portion of the money back. I should emphasize that there are also tax advantages to donating money in this way.”

The result will be the Brosnan Lecture in Biochemistry Endowment Fund. The fund will enable the Department of Biochemistry to invite, on an annual basis, a renowned biochemist to deliver one or more lectures on biochemical research and/or on the history of biochemistry. In addition to delivering the lecture(s), the lecturer should have an opportunity to meet and interact with the department’s research students and faculty. Dr. Brosnan believes this format would have the greatest impact for students.

Reflecting on his career at Memorial, he explains that it was always the students who made his job worthwhile.

“A lot has changed since I came here in 1972, the obvious being size. The class I’m teaching now, on metabolism, would have been maybe 20 students in ’77, and right now I have 166 students in one semester,” said Dr. Brosnan.

“When you’re a youngster like I was, you can be a little aggressive, you want to make your name in science. Now, at the end of my career, I remember the students. Students coming into the lab, doing research degrees . . . Over the years, four of Memorial’s biochemistry students became Rhodes Scholars. It has meant a lot to me.”

The feeling is mutual. Jamie Parsons, (B.Sc.’97, B.Ed.(Intermediate/Secondary)’98, M.Ed.’05), was a student of Dr. Brosnan’s during his undergraduate degree.

Mr. Parsons, who has spent 20 years teaching high school science in St. John’s, attributes the time spent in Dr. Brosnan’s classes as an inspiration in his own career.

“Dr. Brosnan has always been a leading scientist and researcher at Memorial, but I learned much more from him than the subject matter,” said Mr. Parsons. “He encouraged my interest in science and inspired me to share it with others, which ultimately led to my teaching degrees and my career.

“Most importantly though, the way Dr. Brosnan motivated his students is what had the greatest impact on me and what I aspire to be as a teacher,” Mr. Parsons continued. “We were motivated because we all knew how much he was personally invested and cared about our success beyond the classroom. It’s an honour to call him a mentor and friend – and I think of him often as I teach my own students.”

Dr. Brosnan — a celebrated scientist, researcher, educator and generous donor — may be leaving the university, but Memorial students will benefit from his gift for years to come.

As for the soon-to-be retiree, he hopes that his contribution will inspire others to do the same.

“I don’t want to put pressure on anyone, but I do hope that through this article someone else will consider doing this,” Dr. Brosnan said. “Giving to education is the best way we know to improve the lives of many people. Year after year Memorial has educated thousands of Newfoundlanders and Labradorians. But we can’t stand still. And we are in competition with other places, too. That’s why it’s so important to give. And with the added benefit of tax incentives, why not?”