Climate change, economic development and foreign activity have heightened public interest in Arctic issues. These issues have also created expectations among Canadians regarding the Government's ability to respond to challenges arising in the North. While the Arctic continues to be a priority for the Government, operating in this region remains a challenge given the harsh climate, large area, sparse population and limited infrastructure. With their unique capabilities and presence, the Canadian Armed Forces play a key role in exercising sovereignty, protecting Canada's northernmost region and assisting civil authorities in emergency responses. Please join Philippe Hébert, Director of Policy Development at the Department of National Defence, for a discussion on the role of the Canadian Armed Forces in the Arctic. 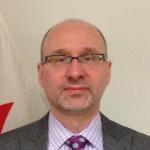 In 2002, Mr. Hébert was named Special Assistant to the Deputy Minister of National Defence. He joined the Directorate of Policy Development in 2003 and was named Director in 2007. His team led the development and drafting of the Canada First Defence Strategy. His responsibilities include defence policy, Arctic security, space and cyber policy. Mr. Hébert holds a Master’s Degree in history from the Université de Montréal. He is the recipient of the Queen Elizabeth II Diamond Jubilee Medal.

If you register to attend in person, a light lunch is provided. Please arrive by 11:45 a.m. so you can get your lunch and a seat for the event's start at 12:00-noon. You can indicate any dietary restrictions you may have when you register.

Webinar instructions will be sent prior to the event.

Complimentary parking provided in lot 16B.