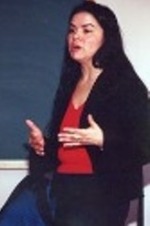 The Advisory Committee on Speakers, Department of Gender Studies, organizes public talks by local and visiting speakers on topics of interest to the university and St. John's communities.

The series runs in the Fall and Winter semesters of each academic year.

All lectures are open to the public and unless otherwise noted are held in the Sally Davis Seminar Room, SN 4087.

The following speakers are confirmed for the Winter 2019 Department of Gender Studies Speakers' Series.

For 30 years, the province of PEI sustained an ideologically repressive anti-abortion ban through a policy/praxis regime based on privileging so-called religious and moral values mired in ignorance and callous indifference to pregnant people’s lived experiences. We decided to expose and eradicate the ignorance and indifference through the politically engaged research processes of Community Based Collaborative Action Research (CBCAR). Through creating deep community-level understandings of injustices, the CBCAR project team animated a cascade of processes for citizens to challenge bodily subjugation on personal, interpersonal, and systemic levels. We have written about this journey in a book, Crossing Troubled Waters: Abortion in Ireland, Northern Ireland, and Prince Edward Island and I am excited to share some of our ideas from that book as well as the ongoing academic activism project so necessary to work with our communities for social justice.

Experiences of Intimate Partner Violence in Child Marriages in Ghana

The association between child marriage and intimate partner violence (IPV) is complex, but child marriage is often considered a key risk factor for experiencing IPV. Thus, studies reveal that women are at risk of experiencing IPV should they marry before the age of 18 years. However, despite the scholarly evidence of the predominance of IPV in child marriages, there is a dearth of research on the phenomenon, especially in Ghana. Most existing studies are quantitative and focus on assessing the prevalence of IPV in child marriage, whereas little is known about the lived IPV experiences of child brides. Based on this, this study used in-depth interviews to illuminate the context, the narratives and the subjective meanings Ghanaian women who married as children give to IPV, as well their experience of IPV, and what factors, according to these women, contribute to IPV.

Taken by the Fairies: Finding Contemporary Meanings in Earlier Traditions

For earlier generations in Newfoundland and Labrador, life was shaped by a belief in fairies. Drawing on materials in the Memorial University Folklore and Language Archive, I explore gendered dimensions of this belief tradition. I consider how sharing narratives of fairy encounters helped people mediate tensions of everyday life and lay the foundation for contemporary attitudes towards Otherness.