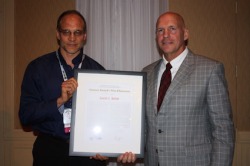 Dr. David Behm, professor in the School of Human Kinetics and Recreation (HKR) has come a long way since his spelling championship in grade five. He has racked up impressive accomplishments, but he acknowledges his most recent award is the most significant recognition he’s received.

At its annual conference in Hamilton, ON in October, the Canadian Society for Exercise Physiology (CSEP) presented Dr. Behm with its highest form of recognition the CSEP/SCPE Honor Award. This is the first time in 30 years since the award’s inception that a researcher from Atlantic Canada has won.

Dr. Behm’s acceptance speech was full of humour like the reference to his spelling success and also humility.

“For me this is not an award for brilliance or intellect,” said Dr. Behm. “In my case, this is an award for persistence and passion for what we are doing.”

He was also quick to acknowledge the team of colleagues, mentors and graduate students he’s worked with along the way who have contributed to his success.

“A teammate is always a teammate,” said Dr. Behm. “You can’t get anywhere without a great team.”

Dr. Behm’s career has focused on various aspects of neuromuscular responses, adaptations associated with strength training responses, muscle activation and its impact on health and performance.

Dr. David Hood a professor with York University nominated Dr. Behm for this award. Dr. Hood has been aware of Dr. Behm’s research activities for many years.

“My nomination was based on the impact of Dr. Behm’s scientific work internationally and the contribution he has made directly to CSEP and Canadians through committee work and knowledge translation,” said Dr. Hood. “Dr. Behm has been very productive in his research.  He has been an important leader in Canada in applied exercise physiology especially in the areas of techniques for the measurement of muscle activation, instability resistance training and stretching.”

Dr. Behm is a highly recognized in this field. He’s an international scholar helping to elevate the recognition and status of Canada in exercise physiology research.

“Dr. Behm’s work ethic, scientific impact and knowledge transfer activities serve as an exemplary role model for scientists not only in Atlantic Canada, but nationally and internationally as well,” said Dr. Hood.