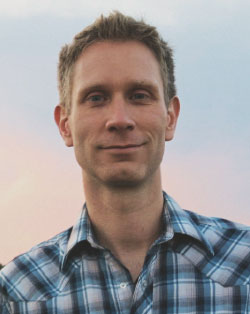 One-day humans may live on the moon, or Mars. But what life will be like there is anybody’s guess. Michael Oman-Reagan, a PhD candidate in anthropology at Memorial University, believes we don’t have to look that far to find inspiration. His work explores social and cultural factors influencing space science and exploration, and how space scientists increasingly shape the ways we imagine the future, both on and off the Earth. The secret to innovation is imagination. Michael says that by imagining human life in space we’ve opened the doors to finding actual solutions for turning science fiction into science fact.

There are many examples of science fiction crossing paths with modern technologies. Take Jules Verne for example. The 19th-century author first imagined a manned lunar landing in his novel The Earth to the Moon, published in 1867, more than one hundred years before NASA’s Apollo 11 succeeded in that exact endeavour. Aspects of both the fictional and the real space missions are similar: both had a crew of three men, had operated under similar projectile calculations, launched from Florida, and returned to Earth with a splash in the Pacific Ocean. The strong similarity between the two begs the question, could some of NASA’s early work on the Apollo missions be inspired in someway by Jules Verne’s remarkably prescient and wild imagination?

Michael says science fiction broadens and challenges our vision of human futures in space and SETI research (a collective acronym for scientific searches for extraterrestrial intelligence.) But he argues that SETI and space exploration, heavily influenced by science fiction as well as prior work in the field, often faces funding challenges due to the problem of perception, more so than merit. The unbelievable and sometimes implausible nature of science fiction can cause people to quickly discredit insights as too far-fetched to be worth actually exploring.

Michael thinks perhaps we’re too quick to come to that conclusion. In his work he uses methods from social science to study how space exploration drives social transformation. He hopes his research will further our understanding of how social and cultural factors have a mutually productive relationship with space science, exploration and science fiction.

“Many of the challenges faced in Newfoundland and Labrador, across the North, and in other places round the world like transportation, planning, labour, mobility, food and energy production, etc. share characteristics of those involved in imagining and building thriving human settlements in space, on the moon, and on Mars to meet all the needs of the residents of those settlements. As space exploration increasingly influences how we imagine, plan, and prepare for the future, this research expands our understanding of the processes that shape possible human futures – both here on Earth, and beyond.”

In 2016, Michael was awarded the Vanier Canada Graduate Scholarship for his PhD research project. This award, among others, earned Michael invitations to many exclusive meetings, workshops, and events related to his research. These unique opportunities included fieldwork sites for his dissertation research and chances to contribute to interdisciplinary conversations about space, science, and the future of the planet.

“Astronauts often say that seeing the Earth from space changes how they think about politics, the environment, social issues, and the future of humanity. This is especially important in an era of human impact on the planet, ongoing wars, and the greatest refugee crisis since the Second World War.”

Once his PhD is complete, Michael hopes to remain in Canada, obtain permanent residency, and continue his research. Whether he works for a university, or an organization like the Canadian Space Agency, Michael wants to be involved in shaping space exploration to ensure it benefits everyone.