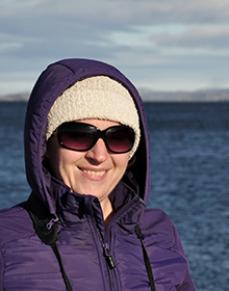 A northern scholarship is responsible for leading Dr. Linda Lait into new depths of marine research.

The Scotland native has degrees from the University of Edinburgh and the University of Lethbridge. She came to Memorial University to pursue a PhD in Biological Sciences. The focus of her study was the history of four different fish species, including Atlantic cod, and how they have evolved over the years. This research has important implications for marine conservation.

Receiving a large scholarship from the Association of Canadian Universities for Northern Studies (ACUNS) enabled her to travel to Labrador and Nunavut to study these species in colder waters, a unique research experience.

I chose Memorial both for the location and because my supervisor, Dr. Steve Carr, was using an interesting new method for DNA sequencing.
My time at Memorial taught me to be independent and work on my own. I also got a lot of experience teaching and supervising students, both of which will serve me well in my future career pursuits.

What program did you complete at Memorial?

I completed my PhD in Biological Sciences, with a focus on evolutionary genetics.

I used high resolution mitogenomics to study the population genetics and phylogeography of four "at-risk" marine fish species: Atlantic cod, Atlantic wolffish, spotted wolffish and northern wolffish. Basically, I used molecular techniques to study the evolutionary history of these species - so how they came to be where they are now, what barriers or phenomena influenced their movement (i.e. the ice ages), and whether there is evidence of recent and/or ongoing gene flow among the populations.

This information is important for their conservation as we need to identify populations or regions that are isolated, or those that are able to share genes. Cod are obviously a very important fish in Newfoundland, and many other places, so we need to understand whether the "Northern cod" are a genetically homogeneous or isolated population. Similarly, the wolffish are all threatened species; we need to identify regions of particular conservation concern.

I also included cod populations from more northern regions (Labrador and Nunavut). These allowed us to explore in greater details questions about the evolutionary origins of this species. The landlocked populations are of particular evolutionary interest as they are of known age and have unusual life history characteristics (i.e. they grow at different rates, are generally larger, and eat other cod as they are the only fish in these lakes).

What were some of your accomplishments during your graduate degree?

I had both academic and teaching accomplishments during my degree. I developed and taught a part of my own course, gaining the respect of both students and faculty. I was able to connect with students and helped them through a difficult course.

I also received a large northern scholarship, the W. Garfield Weston Award for Northern Research (Doctoral) from ACUNS, valued at $50,000. This scholarship allowed me to plan and conduct research in both northern Labrador and Nunavut. This is an experience that I would not have received in most other universities.

What are you doing now after having graduated with your master’s degree/PhD?

I am currently a postdoctoral researcher at the Centre for Biodiversity Genomics at the University of Guelph. I am studying the evolutionary structure of moths in North America in order to identify areas of conservation concern.

I began my postdoc immediately upon completion of my PhD, at the time of my oral defense titled: A Mitogenomic Study of Four At-Risk Marine Fish Species: Atlantic Wolffish, Spotted Wolffish, Northern Wolffish, and Atlantic Cod, with Special Emphasis on the Waters off Newfoundland and Labrador, well before my graduation.

How did Memorial help to get you where you are today?

Memorial offered a number of unique research and teaching experiences, and allowed me the freedom to develop my own research skills. The graduate program provided me the experience to conduct independent research, an invaluable skill in today's academic environment.

Do you have any advice for current and/or future grad students?

Take advantage of every available opportunity. Attend every conference you can, including all of the internal ones. If there is a scholarship, apply for it. I never thought I had a chance with the northern scholarship, but receiving it allowed me to add a fascinating component to my thesis. All of the little things will be important later: teaching, supervising, research experiences and volunteering. Get involved where you can, and have fun doing it.