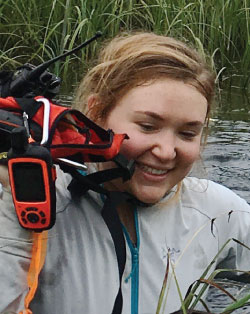 Very few are willing to troll the woods for hours on end in search of something they want. It’s tedious work. It requires patience, commitment, and diligence — all of which Christina Prokopenko has in spades. But while hunters and beasts pursue their prey, this researcher seeks answers to the predator-prey dynamic.

Originally from Ottawa, Christina came to Memorial with a B.Sc. in wildlife biology from the University of Guelph and a master’s degree from the University of Alberta to pursue her PhD with Memorial’s Department of Biology. The Vanier Scholar spent this past winter tracking more than 70 wolves through the wilderness of Manitoba’s Riding Mountain National Park, where she relied upon a good pair of winter boots and an even better sense of predator behaviour.

To keep a safe distance from the pack, she used technology to aid in the hunt. In 2016, she had 13 animals from three packs fitted with GPS-equipped collars, followed by another 14 animals from five packs the following year. In addition to their movements, she also studied the wolves’ hair and droppings along with hair, teeth and bone marrow from their prey to determine which types of animals the wolves hunted each season. Her findings backed up previous research studies indicating that wolves in this particular area only hunted wild prey and did not kill livestock, or other domestic animals.

This study complemented her previous research where she examined the environments in which predators and prey live. That study questioned how changes in environment influence the behaviours of animals and ultimately their survival. To narrow her focus, she evaluated whether the abundance of roads and road disturbance along the eastern slopes of the Canadian Rocky Mountains in south-Âwestern Alberta affected how elk migrate during winter. It turns out they treat roads like a predator risk, and avoid road crossings wherever possible, to the best of their ability. Unfortunately, growth in energy development has rapidly changed the landscape and a proliferation of new roads have popped up in areas that the elk had previously deemed safe, confusing them and putting them on high alert. A change of this magnitude can reshape how they view their habitant, choose where to live, or confidently plan how to escape predators.

She hopes the findings of that study and her current research will aid in future conservation efforts and be useful when assessing new construction within areas that encroach on wild animal habitats.