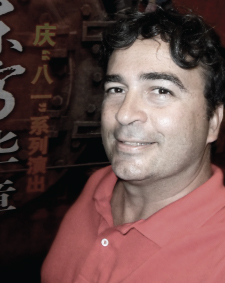 Whether it’s at his current home in Fortaleza City, Brazil or during his time as a graduate student at Memorial in St. John’s, NL, Dr. Manuel Furtado-Neto has always been close to the Atlantic Ocean. But for him, it’s more than enjoying a beautiful seascape. An ocean view is what set him on the path of his life’s work. After completing his PhD in the Department of Biology at Memorial in 1998, he returned to Brazil and began working as a professor with the Federal University of Ceará (UFC). In the last 18 years, he has enjoyed a successful career at UFC, taking on a range of positions dedicated to various aspects of fisheries science, collaborating with government and supporting student success.


Tell me about the program you completed at Memorial?

I completed a PhD program in Biology in 1998 and my supervisor was Dr. Steve M. Carr. My thesis was titled Molecular Systematics and Population Genetics of Marine Vertebrates from Brazil, which was a study of the implications of patterns of DNA sequence variation in a variety of marine vertebrate species of ecological and fisheries interest from Brazilian waters. It was the first time that genetic material from marine vertebrates native to Brazil was used to produce evolutionary trees that explained the evolution of cetaceans, sharks and fishes from South America.

I was fortunate to choose Memorial University for my PhD because Memorial and UFC, where I did my B.Sc. and MSc courses in Brazil, have a Memorandum of Understanding to foster collaboration, while emphasizing academic and cultural exchange in the form of education and research.

Tell me a bit about your experience as a graduate student at Memorial.

My experience as a graduate student at Memorial was excellent. During my time in Newfoundland and Labrador, from 1994 to 1998, I had many different experiences in learning, teaching and research that helped me tremendously. My supervisor, Dr. Steve Carr was the best professor a PhD student could ask for, not only guiding my genetics research but also teaching me the theory and practical skills that would allow me to get the best results from my study. And he was a good friend during my years in St. John’s.

What did you do after you completed your PhD and how has your career progressed?

After I have graduated with my PhD, I returned to UFC. I got a teaching position right away and after a couple of years became a full-time professor with a permanent position. Over the years, I’ve been fortunate to be in a range of different roles at UFC. I was the coordinator of the Graduate Program (Masters and PhD) on Fisheries from 2003 to 2007; director of the Marine Science Institute (LABOMAR) from 2008 to 2010; and secretary of state for Fisheries Aquaculture with the Government of Ceará State, Brazil, from 2011 to 2014. Since 2015 I have been the dean of Student Affairs.

How did Memorial help to get you where you are today?

Memorial helped a lot. One of the most important things I took from the PhD program was the value of gaining international experience and building international connections, because there was opportunity to do just that. That is one of the things I’ve continued to do in my career, and I believe the experience at MUN was the first step to developing those credentials. Over the years I’ve been invited by the United Nations to represent Brazil on numerous occasions, including workshops and meetings around the world with the Food and Agricultural Organization and the United Nations Environment Programme. I’ve also been able to teach outside Brazil, one example being a summer course at Shanghai Jiao Tong University, in Shanghai, China, as a visiting professor participating in the Top China University Program.