Education fit for a King 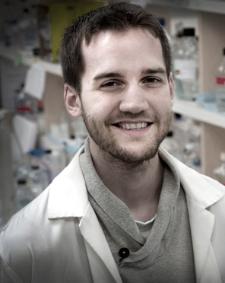 A native Newfoundlander, Mr. King grew up in the city of Mount Pearl and upon completion of his high school education, decided to come to Memorial. Affordable tuition, closeness to home and interesting course options made Memorial an easy choice for Mr. King. He first came to Memorial to complete a bachelor of science degree in 2008. Upon completion of his biochemistry (honours) degree, he decided to advance his studies and pursue a graduate degree in immunology and infectious diseases.

“During my honours project in Dr. Larijani’s laboratory, I had developed a niche in both the lab and our field of study, and I became really excited about the research I was doing,” said Mr. King. “I had already engineered several projects in the lab, produced data that I presented at two scientific conferences and mentored a student of my own. Therefore, I decided I would further my research at the graduate level.”

Throughout his time at Memorial, Mr. King received numerous high profile awards, including: being ranked fourth out of 750 applicants for the Canadian Institutes of Health Research Frederick Banting and Charles Best Canada doctoral fellowship, valued at $105,000 (2014-17); the Memorial University of Newfoundland Dean’s Fellowship Award, valued at $40,000 (2012, although gratefully declined); and the Beatrice Hunter Cancer Research Institute, PhD fellowship, valued at $35,700 (2012-14).

Earlier this year, Mr. King and his team published a paper in the journal Structure titled Catalytic Pocket Inaccessibility of Activation-Induced Cytidine Deaminase Is a Safeguard against Excessive Mutagenic Activity.
“Because Structure is one of the highest impact journals in the world dealing with structure-based studies related to disease, we feel that our work will be recognized well in the field,” he said. “This study represents a critical first step towards the design of drugs that inhibit the DNA-mutating enzyme AID. Given the role AID plays in initiating and exacerbating leukemia/lymphomas, such drugs may bolster future chemotherapeutic regimens.”

“It’s very important for graduate students,” he said. “I think working extremely hard is invaluable, as it also shapes the rest of your life. But at the same time, it is important to know when to take a break. Work hard, think even harder, but know when to relax. A fatigued mind is an ineffective one.”

Mr. King is a strong advocate for graduate studies at Memorial University. He believes the university offers great research opportunities and a landscape like no other.

“I really enjoy working in a lab that competes at the very cutting edge of their research field, at the international level, yet is nestled in a relaxing environment. Close by, we have the Memorial University Botanical Garden and Pippy Park, filled with walking trails and natural scenery. And let’s not forget Bitters.”