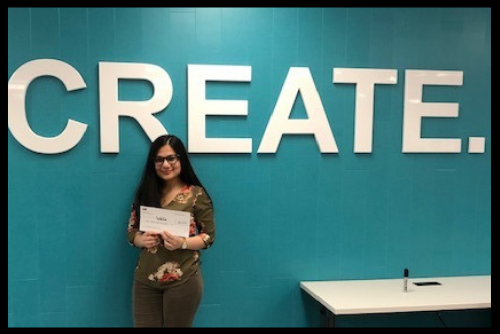 Growing up in Bangladesh, she was exceedingly aware of the rampant sexual violence that occurred in the country and wanted to do something about it. According to Ain O Salish Kendra, a Bangladeshi organization that supports victims of violence, nearly 1,000 rape cases were reported between January and September of 2020 (as reported in The Guardian).

She came up with the idea of a discreet personal protection device, SafeTie, that consists of a small piece of hardware with a button and adjustable straps. Upon clicking the button a pre-set number of times, a notification is sent to the phones of the user’s family members to alert them that the user is in danger. It also provides co-ordinates to the user’s location and allows family members to communicate via the mobile app to co-ordinate rescue efforts.

“We’ve made it this way because law enforcement systems are not as effective back home,” Ms. Protiti explained, referring to the rape culture that is pervasive even in Bangladeshi law enforcement. According to Human Rights Watch, sexual assault survivors who approach the police often face victim blaming and a refusal to file their cases. Thus, her idea is focused around users’ next best resource: their community.

After writing her entrepreneurship paper, Ms. Protiti brought her idea to the MCE and started working on a plan. She says she never expected to do something as bold as starting a company of her own.

“I never believed in myself, and I don’t think most women in our country do. But the MCE really helped me navigate my way to where I am now. I wouldn’t be an entrepreneur if not for it.”

Ms. Protiti, who is a student in the Faculty of Business Administration, is currently on her second entrepreneurial work term with the MCE as she works on developing the prototype.

She’s come a long way in her entrepreneurial journey.

“When I first had this idea, I wanted someone to do something about it – not necessarily me. But now, I actually believe in myself; I believe that I can build a team and I can do this. If you’re afraid, I think that it’s okay to be afraid as long as you don’t stop. The fear will be there, but make a plan and do it anyway.”

Interested in starting your entrepreneurial journey? Book a meeting with a startup coach today.

You can reach out to Sharad Protiti at safetiesolutions@gmail.com. To learn more about MCE’s early-stage programming, startup coaching or funding visit www.mun.ca/mce/ or email mce@mun.ca.