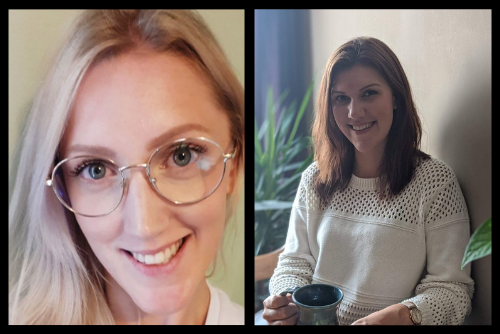 When COVID-19 swept through Canada, sisters Maggie Hoyles and Beth Ivany, who lived in different provinces, needed to find new ways to connect as their travel plans were canceled and their cities entered into lockdowns.

Looking for a way to recreate the excitement of a night out together, they explored creative ways to have fun virtually such as chatting through Facetime and syncing their Spotify playlists so they could dance to the same tunes together. Soon, they started inviting friends to their virtual hangouts, which included synced music, games, and contests to keep the sessions interesting and exciting.

“We wanted everyone to [still] enjoy the same experiences together, and you’re more engaged when you’re actually doing something. We were in the middle of doing it ourselves when we thought – this should be an app; it would be really fun.”

Thus, the idea for Downtown was born. While still a work-in-progress, the vision for Downtown is an application that connects users through shared experiences, such as listening to a concert together or learning to mix drinks from home, interspersed with speed networking rounds meant to mimic the experience of meeting people at bar.

In the meantime, Ms. Hoyles and Ms. Ivany have been using a range of different apps to host their events.

“Over the summer, we were using Hopin,” Ms. Hoyles said, referring to an online events platform that allows users to create virtual events of their own. She set up microphones and sound equipment in her living room to create a virtual concert, and had musicians come in to play.

“And in the middle, we had speed networking where anyone in attendance could choose to have two minutes to talk to someone new.”

“We got a lot of good comments on that,” Ms. Hoyles said about her concert and networking event. “We got a lot of interest on it, and people followed up asking questions about the next one.”

It wasn’t always smooth sailing though.

“We had a Pride speed networking event too, but that one didn’t actually go over as well – we actually only received hate for it. A lot of our stuff didn’t even work out initially, we only got rejection. I don’t even know why we kept going,” Ms. Hoyles laughed. “But we did.”

Ms. Hoyles and Ms. Ivany’s positive attitude have gotten them far. In the summer of 2020, Ms. Hoyles, a Memorial University student, started an entrepreneurial work term with the Memorial Centre for Entrepreneurship (MCE) to work on Downtown full-time, in addition to receiving a $4,500 bursary and mentorship from Jason Trask, MCE’s programs catalyst.

“I learned a lot there,” she said. “Even about my own thinking. I have a lot of Jason quotes but one of them is ‘Maggie, the mistake you’re making is you think everyone thinks like you,’ and that was so true. It was holding us back and we didn’t even realize.”

That wasn’t the only challenge they faced. As a mom, student and entrepreneur, Ms. Hoyles is still working on finding a balance.

“Right now, I feel like that’s what I’m struggling with, just having my attention pulled in different directions. I have two boys, they’ve been around the entrepreneurial stuff now,” she said. “It’s also very rewarding because I feel like they’re getting benefit from [my entrepreneurial work] too. It makes me happy.”

For now, there’s nowhere to go but forward as Ms. Hoyles and Ms. Ivany continue to work on their app. When asked what advice she would give to aspiring entrepreneurs, she shared her honest take on entrepreneurship.

“People are always talking about the hustle and how you have to do all these things but at the end of the day, I feel like it’s really about the small steps. On the days when you feel overwhelmed, just do one small thing, even if it’s sending an email to someone. And one day you’ll realize all those small things got you somewhere. No matter how you feel on a certain day, just keep believing in yourself.”

Interested in starting your entrepreneurial journey? Book a meeting with a startup coach today.

Visit downtownapp.net to learn more about Downtown and sign up for Ms. Hoyles and Ms. Ivany’s next event. To learn more about MCE’s early-stage programming, startup coaching or funding visit www.mun.ca/mce/ or email mce@mun.ca.