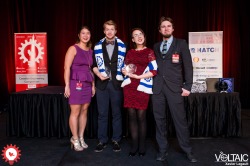 Ms. Warren and Mr. Snow secured their place at CEC when they won first in the re-engineering category at the Atlantic Canadian Competition (AEC) this past January, hosted by the University of New Brunswick.

“We had a great time meeting the other students and members of industry, not to mention the design challenge itself,” said Ms. Warren. “It was particularly great to see the students from the Atlantic region again. Even though we were competing with each other, there was a real sense of being there as a team to represent the Atlantic provinces. Winners from the regional competition were given scarves to wear to the CEC banquet to show that we were all together. When Peter and I accepted our award everyone waved their scarves in the air. It was absolutely great and we felt like we had a whole team of new friends supporting us.”

For the re-engineering category, teams were given a relevant design and asked to re-engineer it under a new set of constraints. Teams had eight hours to fabricate a design and presentation taking into account all relevant aspects of the engineering process such as material availability, finances, and so on. Each design was judged based on practicality, originality, feasibility and marketability.

For this year’s re-engineering competition, the challenge centred around the da Vinci Surgical System – a set of four robotic arms controlled by a surgeon when doing minimally invasive procedures. Currently, the robotic arms have to be in the same room as the patient since the control console and the robotic arms are attached.

“The first design challenge was to make it possible to air drop the robot console at the site of a natural disaster, move it over any terrain it might encounter, then control it from anywhere in the world,” said Ms. Warren. “We were lucky to have a mix of skills – I have an electrical background and Peter has a mechanical background – we divided the challenge into separate elements relevant to our own programs.”

The second half of the challenge was to design a method to record how the robotic arms and the surgeon work together when performing surgical procedures to make a training tool for new surgeons using the system.

“Since neither of us has experience creating simulations, we focused on the architecture of how our program would be laid out if we really did create one,” explained Ms. Warren. “We also focused on ensuring we fully understood the processes we would use to record the surgeon's movements and inputs as well as the video from the surgery itself.”

Ms. Warren and Mr. Snow are thrilled with how they worked together as a team, each bringing their own strengths to the challenge.

“We both had such a great time and learned so much,” said Mr. Snow. “It was impressive once again to see how everyone had a different and innovative perspective on the same problem. I couldn't have had a better partner and we are both definitely looking forward to experiencing it again.”

“Congratulations to Katy and Peter on winning second place at CEC,” said Dr. Greg Naterer, dean, Faculty of Engineering and Applied Science. “This is a wonderful achievement and we are very proud of them for representing Memorial engineering so well at this national competition.”

Ms. Warren and Mr. Snow are planning to compete at AEC again next year, and are even considering competing in a different category.