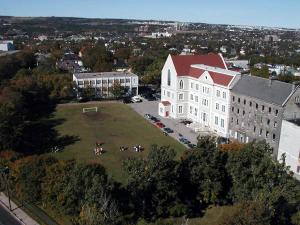 In 2006, concerned about software licensing issues and attacks from computer viruses and other computer malware, the computer technologies teacher, Paul Dunn, the computer systems administrator, Kurt Pomeroy and a School Board member Dr. Gerard Farrell decided to implement a Linux solution for the school's computer lab at St. Bonaventure's College. They approached the Department of Computer Science to seek assistance in this innovative endeavor to revitalize their computer lab infrastructure. Up until then the school had been using a menagerie of Microsoft products on a variety of heterogeneous computer platforms. After analyzing the situation, the CS systems administrators suggested that the best strategy would be to implement a system similar to the Labnet Linux management system developed by the Department of Computer Science and installed in computer labs throughout Memorial University. In the first phase of the project it was decided to use a Ubuntu Linux distribution while a modified Labnet could be developed. To further ensure the success of the project, a surplus of Labnet computers from a computer refresh at Memorial University were made available to the school through the Computer for Schools program. In November 2007 a modified version of the Labnet software system was finally installed and operational in the school's computer lab.

Over the years the Department of Computer Science continued in its support role for the computer lab at St. Bonaventure's College. In 2008 the school's connection to the Internet was upgraded and, volunteers from the computer science department added a new firewall program to the Labnet installation along with software upgrades. In 2009 Marian Wissink and Michael Rayment received the volunteer of the year award from St. Bonaventure's College. In 2010 Labnet services were extended to the affiliated primary school, Holland Hall. In April of 2011 a new release of Labnet was installed at St. Bonaventure's College with new and enhanced features for managing the computer software images and performing automated data backups. With this new Labnet release, software updates and enhancements can now be automatically uploaded from the Department of Computer Science ensuring that the latest software is available in the schools' computer labs.

The Department of Computer Science remains committed to providing assistance to schools wishing to implement a similar solution to the costly issues of software management and security.