Jim Youden was born just outside of St. John’s to a family that had relocated there from the community of Bull Cove, which is near Brigus. His grandfather was the famous navigator, Thomas Youden, and the family was made up of boat builders and sailors. Jim as a young boy of 12 years old, spent a lot of time working as a carpenter for the neighbours. Jim says “I was selling little cabinets and stands that I had made for anywhere between 50 cents and 3 dollars”.

As Jim got older he began working bigger jobs on construction projects and even had his own contracting business doing repair jobs on the side to older historic properties around St. John’s. In 1971, Jim began specializing his carpentry to producing heritage style windows using only traditional methods of construction and as many traditional materials as he could get to duplicate the design and workmanship of the older style windows. 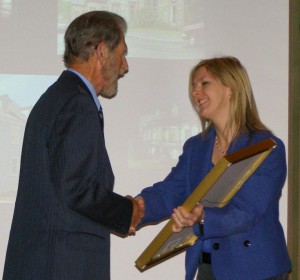 Since then, Jim’s work on heritage window restoration has let to a large amount of successful heritage award-winning properties such as the Fogo Island Co-Op building, Cabot Tower, Cape Spear Lighthouse, the Temperance St. Stone Houses, the Coaker premise, the Ryan premises, Hawthorne Cottage, and many of the homes in Brigus.

Jim learned his skills from several people, most influential was Gill Lynch from paradise and the carpenters from the Canadian National Railway’s Dockyard in St. John’s. Jim bought old equipment and tools from the Stokes’, Vardy’s, and Bradburry’s which he then used to recreate the windows from information he found in some really old books he found. “The books contained all of those little details that were long forgotten, once I was shown and I read those books, well you could teach yourself from there” says Jim.

“When I started I could buy my pine locally, in Glennwood, Appleton or Benton, the mills picked out the good stuff and set it to one side. Today, it’s all from the mainland or the states, usually ordered special for me” says Jim when asked about the process of making the windows. “The glass came from England when I started and was carried by Thomas’ and Peters & Sons. Then after that it came from Montreal and PPG used to stock it, they still do but it’s usually for custom orders that I make”. In his heyday, Jim says that he could make up to a window per day if they were simple. The more detailed the window the more time it takes to make.

Jim says “An old style window made with good material and that is well maintained with paint and putty can last a very long time. The storm window will give out long before the original window will”. When speaking to Jim you can hear the pride he has for the windows he’s made. He has a few that are particularly special to him. Jim says “The windows in the SUF Hall in Heart’s content were recreated from some old newspaper photos. That’s all we had to go on and when it was put together it looked right.”

Jim says that he’s been making windows not because of the money, but because of the love of making the windows. “I can drive around town and see all of the projects I’ve done over the years and 40 years later they are still there. You leave a footprint.” says Jim and he doesn’t plan on quitting the habit yet. Jim Says:

I intend to make windows until I can’t do it anymore. I guess I had a weakness for wood as a little boy and I still got it. I can look at a piece of wood and see what you can make out of it. Some wood is good for windows and some wood is not. It’s an acquired knowledge from teaching yourself and experience. There are some people who are interested in propagating the knowledge and the world still makes windows in the old way, like in Paris. There will always be a market for windows because there will always be heritage buildings to maintain.

Jim says that he’s been making windows not because of the money, but because of the love of making the windows. “I can drive around town and see all of the projects I’ve done over the years and 40 years later they are still there. You leave a footprint.” says Jim and he doesn’t plan on quitting the habit yet.