'M' is for Maritime Archaic

The Maritime Archaic Tradition is an expression used by archaeologists to classify a particular set of archaeological traits, which occur along the coast and hinterland of northeastern New England and Atlantic Canada. Now retired Memorial University archaeologist James Tuck coined the term in the early 1970s, following his excavation of an elaborate cemetery in Port au Choix, Newfoundland, which was in use from approximately 4400 to 3300 years ago (Tuck 1976). In his definition the word Maritime refers to settlement and subsistence practices. These are inferred from the geography of the archaeological site locations and from the recovered artifact and organic assemblages. The word Archaic refers to the specific historic period of the archaeological remains (~8000-3200 years ago), which was prior to the widespread use of pottery and agriculture in North America. Finally, the word Tradition refers to the recurrence in time and space of this “remarkably uniform group of cultural manifestations, [including] environment, economy, technology, art, and religion” (Tuck 1976).

Archaeologists believe that the Maritime Archaic Tradition originated from the first people to settle in the Strait of Belle Isle region 9,000 years ago, or before. As the Ice Age glaciers receded, the land became inhabitable to plants, animals, and people, and over time these populations migrated northward. By ~7500 years ago the marine signature described by Tuck was established. It can be seen, for example, in the class of artifacts and organic remains recovered from the L’Anse Amour burial mound, including lanceolate spear points and walrus tusk (Tuck & McGhee 1976). This mound is the oldest known burial of its kind in North America, and is located near Forteau, in southern Labrador.

Additional archaeological research resulted in the identification of additional sites, and helped to further define this Tradition—including principally work by the Smithsonian Institution’s William Fitzhugh (2006) in Hamilton Inlet, and by Tuck (1975) and Fitzhugh (1978) in northern Labrador, at places such as Rattlers Bight, Sandy Cove, Aillik, Saglek Bay, and Nulliak Cove. The physical evidence at these sites included archaeological features such as a cemetery, burial mounds, circular and longhouse tent sites, and artifacts including, but not limited to, ground and chipped stone tools, and copper and ground stone ornamentations. Based on these remains, it appears that the Maritime Archaic Tradition became more elaborate over time. Evidence for this increasing complexity can be seen in the reported increase in site size, and the correlated regional variation (Holly 2013), which has been classified using regionally specific terms, such as the Labrador Archaic (Rankin 2008), the Labrador Maritime Archaic (Fitzhugh 2006), the Northern Branch and Southern Branch Maritime Archaic (Tuck 1998), and the Sandy Cove complex, Naksak complex, Rattlers Bight phase, and Hound Pond component (Fitzhugh 1978).

In recent years the picture of the Maritime Archaic Tradition has become even more complex, as archaeologists have identified some of characteristics of this tradition at archaeological sites away from the coast, deep in the interior of the Quebec-Labrador peninsula. The most intensive work to identify these interior adaptations has occurred at Kameshtashtan, a large lake near the Quebec-Labrador border, by archaeologists and Innu working with the Tshikapisk Foundation. Their collaboration has resulted in the identification of archaeological sites including stone spear points resembling those of the Maritime Archaic Tradition, dating between ~7000 and 4000 years ago (see http://www.tshikapisk.org/home/album-7). Based on the characteristics of the stone tools and archaeological features identified, and through analogy with historic Innu practices at the lake, it is believed that people linked with the Maritime Archaic Tradition travelled here to hunt, fish, and socialize (Jenkinson & Arbour 2014).

Who the people were that followed the Maritime Archaic Tradition is not a simple question to answer. In 1975 Tuck published an article called The Northeastern Maritime Continuum: 8000 Years of Cultural Development in the Far Northeast, in which he argued that the people involved in the Tradition were the ancestors of the Algonquian peoples living throughout the northeast of North America today, including the Innu, Cree, and Mi’kmaq, whose own oral histories align with this point of view. Fitzhugh (2006) on the other hand, surmised that the people involved in this tradition went extinct sometime around 3200 years ago, as a result of a variety of pressures, which included climate change, and the arrival of new groups of Indigenous peoples not previously seen in Labrador. Either way, through internal changes or external pressure, or both, the lifestyle expressed through the Maritime Archaic Tradition is not observable in the archaeological record of Labrador after ~3200 years ago.

Fitzhugh, W. 2006. Settlement, Social and Ceremonial Change in the Labrador Maritime Archaic. In The Archaic of the Far Northeast. Orono, ME: The University of Maine Press.

Holly, D. jr. 2013. History in the Making: The Archaeology of the Eastern Subarctic. Maryland: AltaMira Press.

Jenkinson, A. & C. Arbour. 2014. Tshetshuk, Kamestastin: Interior/coastal connections in the Maritime Archaic period of Québec/Labrador. Paper presented at the 79th Annual Meeting of the Society for American Archaeology, Austin, Texas.

Rankin, L. 2008. Native Peoples from the Ice Age to the Extinction of the Beothuk (c.9000 Years Ago to AD 1829). In A short History of Newfoundland and Labrador. Portugal Cove-St. Phillips, NL: Boulder Publications. 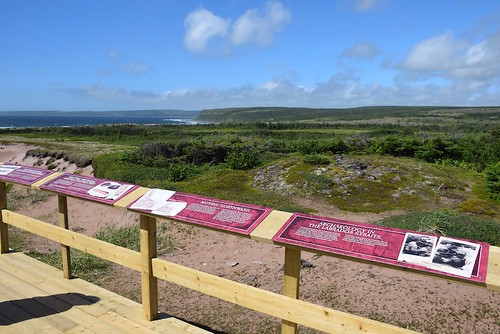