For hundreds of years the kayaki was an essential tool for Inuit on the coast of Labrador, and its use persisted here until the late 20th century (Brake 2016). On one hand, it was the most important means of making a living, and on the other hand it had enormous social importance allowing for regular communication over long distances. The key to economic prosperity in the traditional Inuit world, it was, hands down, the most effective vehicle for subsistence-level sea mammal hunting, on which life depended, until the introduction of internal combustion engines, particularly outboard motors. It was also an instrument of exploration and international affairs, facilitating both friendly and hostile interactions with other groups of people.

The Labrador kayak has been described as the most extreme example of the eastern arctic kayak family. Traditional kayaks built east of Hudson Strait share a number of important characteristics: flat or nearly flat bottoms, flat decks, a long overhanging bow, a rear-of-centre cockpit, flared sides, and a maximum width located behind the centre of the boat (Arima 2004:187). Labrador Inuit took each of these traits to the limit and produced heavily built, fast, stable and very sea-worthy kayaks that were the largest of those made in the eastern arctic, quite often being more than twenty feet long (Brake 2016; Figure 1).

Despite the fact that Labrador kayaks would have been among the first of those encountered by Europeans in mainland North America, the traditional kayaks from this region are still among the least well known to non-Inuit. Until quite recently they have been the subject of relatively little scholarly attention (Nochasak & Brake 2018; Brake 2016). Though a few noted researchers have devoted a few pages or a few paragraphs to these impressive boats, far less ink has been spilt on them to date than on their cousins in Greenland and their more distant relatives in Alaska. This is even more surprising considering the wealth of information available on the Labrador kayak through the historical record, archaeological data, preserved examples from this region in museums around the world (including the oldest surviving Canadian kayakii), and a rich and largely untapped body of traditional knowledge. The Nunatsiavut Government is now addressing this gap through research of its own and the effort is producing interesting results. For example, it has long been known that there were well over 200 kayaks in the Labrador Moravian stations in 1861 (MPA vol. 24:277), and that the number had declined by 1876 (Kleivan 1966:46), but it was not until 2016 that Benjamin la Trobe's 1888 data were published, showing a later increase in the number of kayaks on the coast. By 1888 there were nearly 200 kayaks in the Labrador Moravian stations again, and they had retaken their position as the most common boats in use by Inuit in those communities (Brake 2016).

Labrador and Greenland have a few things in common when it comes to kayaks. Aside from sharing some general kayak characteristics, both regions also attracted the attentions of Moravian missionaries during the 18th century. These missionaries established stations in each region to convert Inuit to Christianity, to educate and to tradeiii. This is significant for the student of kayak history because Moravian missionaries were some of the world’s most meticulous record keepers and today Greenland and Labrador are blessed with an unusually detailed archival heritage which provides us with a wealth of information on almost any topic that can be imagined – including kayaking. Hundreds, if not thousands, of references to kayaks and kayaking paint a vivid picture of daily use detailing such things as the regular delivery of mail historically by ‘post-kayak’, and more exciting occurrences like kayakers being attacked by injured walruses, whales and other angry sea mammals, harrowing accounts of hunting polar bears by kayak, daring rescues and numerous tragic incidents involving loss of life when things went horribly wrong. One powerful record from the Okak diary describes the rescue of a whaling crew by children in kayaks after an umiak was smashed by an injured Bowhead in 1800 (Taylor 1985:127). Drawings, paintings, lithographs, and even photographs showing kayaks from the 1870s onwards, are icing on the cake (Figure 2).

Although the Moravians in Greenland and Labrador wanted Inuit to maintain their economic independence, they did complain about how the kayak was, in their view, an impediment to formal education. In the mid-19th century a missionary in Greenland was concerned about a lack of Inuit interest in school because of their preoccupation with kayaks. He felt that Inuit were very smart, but worried about what he saw to be a lack of interest in education because of their infatuation with kayaking. He wrote:

“Nothing surpasses the kayak to them,—which is indeed no wonder. It must be pleasant, to be able to seat oneself in one of these little vessels, and navigate it as a Greenlander can… As this pursuit has such a charm for them, and is indeed the principal means of procuring their subsistence, it is considered of the utmost importance, to which all other employments are inferior” (MPA vol 23:501)

A similar sentiment was being expressed 25 years earlier in the Labrador community of Hebron when a missionary wrote in 1833 that “As soon as a boy is able to manage a kayak, he ordinarily leaves the school, and loses all inclination for learning” (MPA vol. 12: 452).

Greenland and Labrador also have something in common in relation to the revival of kayaking as a cultural activity. Although kayaking has persisted in some parts of Greenland since pre-contact times, it was once lost to the Polar Inuit of northwestern Greenland. It was reintroduced to them by an Inuit shaman named Kitdlarssuakiv from Baffin Island who moved to Greenland over the course of several years to escape a blood feud (Bennett 2006). Here in Labrador, a young Inuk named Noah Nochasak has been busy since the fall of 2017 with a kayak revival that began after his own four year long diaspora, though his was motivated by a passion for kayaking and the desire for training, rather than a need to escape violent retribution. Today Noah runs the Nunatsiavut Government’s Kayak Revival Program which is providing opportunities for local people to learn how to build and use kayaks for the first time in almost 50 years.

I would like to end this submission with an account of an event that occurred in Labrador in May of 1843 that was originally published in the Moravian Periodical Accounts. This record is particularly interesting because it was written by an Inuk – another Noah, this one living in the Hopedale region at the time. It was originally written in Inuktitut and was translated into English by a missionary:

“On the evening of May 6th, it being perfectly calm, I went in my kayak between the ice, and discovered a seal in the water which I killed. I then dragged it to the ice, intending to get out and to secure my prey. But, while thus employed, the wind began to blow from the north, and rose higher and higher; whereupon I left the seal, and preceded in the kayak. It grew darker and darker, and the ice crowded closer together, and I could not get on with the boat. I looked round in every direction for an opening, but I could not stir the kayak. Then I began to be anxious, and looked up to the Lord… I tried to gain a point; where I could get out, but I felt my hands growing weak. Yet I got out, drew my kayak on the ice, put the seal by the side of it, and divided it, in order to eat part of it; but when I saw the great waves coming like mountains upon me, I despaired of ever seeing my family again. [He had been driven with the ice off the land.] Then, standing by my kayak, I again cried out to the Lord… It having grown dark, and raining violently, I crept into my kayak, and there I spent the whole night in fervent prayer. The next morning I saw no land – nothing but water; but all my anxiety was gone. At last I observed something dark towards the south and thought ‘this must be land, or something else’, and, behold, land actually appeared! As I got nearer to it, I tried to launch my kayak into the water; but there were great waves, by which it was upset. At last I succeeded in reaching the land, and when I discerned it, behold, it was Ukkalektok! (Hare’s Land, a spring provision-station of the Inuit, where this brother had taken up his abode at that time). Gratitude dried up my tears. When I was going home, I thanked the Lord all the way with a loud voice, for having given me my life again, and protected me from all harm. The ice on which I had been, went directly to pieces” (MPA vol. 17:82).

Submitted by Jamie Brake, who has been serving Labrador Inuit as the Nunatsiavut Government’s Archaeologist for the past ten years. He holds a BA and an MA in archaeology and is currently completing PhD studies through Memorial University, focusing on the development of heritage policy and legislation in Nunatsiavut. He is a former president of the Newfoundland and Labrador Archaeological Society, co-chairs Canada’s National Archaeological Data Managers Committee, and is a proud member of Nain’s volunteer fire brigade.

Notes
iSpelled ‘Kajak’ in standardized Labrador Inuktitut.
iiIn 2013 Harvey Golden built a replica of a kayak that is currently housed in a French museum that was collected from Labrador sometime prior to 1752. As he states, “It is very likely to be the oldest intact Canadian kayak in the world” http://www.traditionalkayaks.com/Kayakreplicas/MBAR1794.html.
iiiThe nature of the trading relationships between Moravians and Inuit in Labrador and Greenland was different – see Toft (2016).
ivSpelled Qitdlarssuaq in Nunavut dialect. 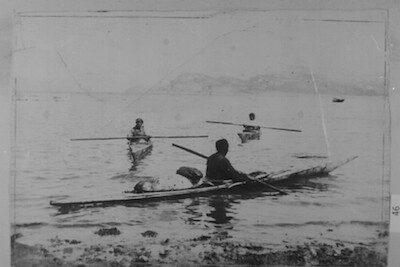