The Canada Jay is a national and local Labrador favourite. The sometimes mischievous and brazen bird turns up at most Labrador boil-ups, joining in with gatherings of friends and family who are out fishing, hunting, or just enjoying a day on the land. At a boil-up, a fire is lit with collected wood and kindling, to prepare tea or coffee and a snack: anything from toast to cookies, biscuits, or wieners, and so on. For treats like that, Canada Jays are often brave enough to feed from your hand. (pictured below)

The Canada Jay was officially renamed from Gray Jay in July 2018, by the American Ornithological Society (AOS). In 1947, the bird had been officially named the Gray Jay instead of the Canada Jay to avoid “geographical awkwardness” in referring to different subspecies. After a widely publicized campaign by the Royal Canadian Geographical Society to have the species recognized as Canada’s national bird, many people began to ask why the original name was no longer being used. This led to a vote by the AOS to reinstate the name “Canada Jay” (Strickland 2017).

The Canada Jay is also known as “meat-bird” or “camp-robber” for their mischievous behaviour. Another colloquial name, whiskey-jack, has Indigenous origins. The name whiskey-jack originally came from the word Wisakedjak which in Cree folklore is a transforming, trickster spirit who embarks on humorous adventures (Native Languages of the Americas).

Canada Jays live year-round in the northern forests of Canada from coast to coast. They are hardy birds who seem to have the cold, dark winters mastered like their human Canadian counterparts, and they are known to live for many years – an average of 8 but sometimes as many as 15-16 years.

A key to their success during the long winter months in the Canadian north is their food storing. The Canada Jay will collect food up to 1000 times a day during the plentiful summer, grinding it into a paste mixed with saliva for storage behind a piece of bark or lichen or in a crack in a tree. The smart and resourceful Canada Jays store their food for the harsh winter evenly throughout the forest, rather than in a large cache, so as not to allow other jays or foragers to find their cache and steal a significant amount of food. Research has shown that jays can remember where they hid their food as well, and its efficient retrieval allows them to survive the winter without migrating to warmer regions (Waite and Strickland 2006).

Like true romantics, Canada Jays are monogamous breeders that mate for life. During the breeding season, a pair of jays are accompanied by a third juvenile jay that helps in nest-building and feeding the coming brood (Strickland 1991).

When not enjoying snacks from generous Labradorians, the Canada Jay feeds on bugs, berries, and fungi, among other things. Its close cousin, the Blue Jay, eats by beating its beak on hard food, whereas the Canada Jay pulls off small pieces by tugging and pulling. It’s common for people to have their own unique stories about the charismatic Canada Jay, which mostly feature its bold efforts to get a bite of food. (pictured below)

The Canada Jay is a familiar face to Labradorians and Canadians alike, who most often welcome the mischievous and spirited birds by watching or photographing them, or sharing a lunch. (pictured below)

Submitted by Michelle Saunders, the Labrador Institute International Indigenous Intern for 2019. She is also working on a field guide to the birds of Nunatsiavut, with Memorial University biology professor Dr. Ian Jones. Check out some of the book's advance media coverage and Michelle's report on her tour of communities, collecting information and ideas.  This field guide is funded by the Tradition and Transition research project.

Waite, T. A. and D. Strickland. (2006). Climate change and the demographic demise of a hoarding bird living on the edge. Proc. R. Soc. B. 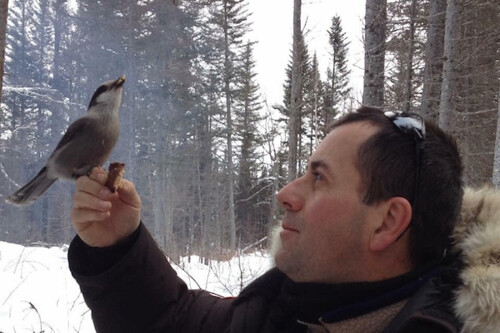