'F' is for Fermont

Growing up in Labrador West, our family would often take a day trip car ride to Fermont, QC, about 25 km away. My brother and I would sit in the back seat and marvel at how neat it was to cross the border to another province just a short distance from our home.

Fermont is located near the border where Labrador joins Quebec. Labrador City, Wabush, and Fermont are three isolated mining communities in the western area of Labrador and northeastern part of Quebec. The isolation meant that Fermont was the only other place to visit if you wanted a change of scenery from Labrador West and would often, and still, be a popular family outing destination for Labrador West families. Fermont is accessible by road on Quebec’s provincial highway route 389; this same stretch of highway joins on to the Trans-Labrador Highway route 500 at the border. Fermont does not have its own airport, but travellers can fly into Wabush Airport, and then travel by road to Fermont.

Fermont was settled in 1972 as a town specifically built for workers in the Mont Wright iron ore mine and their families; hence the name ‘Iron Mountain’ from the French fer ‘iron’ and mont ‘mountain’ (Everett-Heath, 2018).
Fermont, with a population of 2474 (Statistics Canada, 2016), is home to a very unique windscreen structure called “The Wall” which contains housing, businesses and services and is 50 metres high and 1.3 kilometres in length. It was built to withstand prevailing winds that existed in the harsh northern climate. Fermont was the first new town in Canada specifically designed to respond to the realities of the harsh climactic conditions of the sub-arctic and to address the problem to living in isolation (Sheppard, 2011). This unique structure, completed in 1974, was the main draw for visitors from Labrador West. Behind the V-shaped wall, bungalow style residences are also available.

Sheppard, A. (2011). Fermont: the making of a new town in the Canadian Sub-Arctic. Paper presented at the Ion Mincu School of Architecture and Urbanism, Bucharest, Romania. 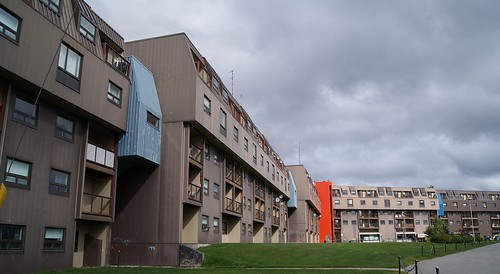