'B' is for Biochar

Many of you are probably familiar with ‘biochar.’ Others may not know what biochar is. But one thing can be said for sure: whether or not you are familiar with the term, every one of you has seen it and experienced it in one way or another. Those of you who have rural backgrounds might have seen parents or grandparents distributing some of the waste materials from the woodstove or bonfire to the backyard garden. So now, everyone knows what kind of thing I am talking about: ash. Biochar is not quite ash; it is closer to charcoal. “Biochar” is a relatively recent term where ‘bio’ from the word biomass and ‘char’ from the word charcoal combine together to make the word biochar. Technically, biochar is a char-like substance produced from burning biomass under low oxygen conditions.

Now you might ask me, “What’s the big thing about biochar, and as a soil scientist what do you do with this worthless simple thing?” Since I started my job with the Labrador Institute in 2012, my area of research has been centred on this material. I have tested biochar in collaboration with Desmond Sellars and some other local farmers to see whether applying biochar to soil can improve fertility and crop productivity in the sandy agricultural soil of Happy Valley-Goose Bay. But I have not invented this strange idea, nor am I the first person applying charcoal to the unfertile sandy soil to make it productive.

Let’s look at the history of biochar. Archaeological evidence suggests that some 2500 years ago there was a civilization in the Amazon Basin of South America who burned biomass and other organic wastes to create char. They incorporated huge amounts of char into the soil, resulting in an extensive region of highly fertile dark-coloured soil locally known as “terra preta,” Portuguese for ‘black earth’. For centuries terra preta remained fertile and supported the food production of the ancient Amazonians. These terra preta soils are still fertile compared to the adjacent non-terra preta soils developed from the same parent materials but untreated with char.

Over the centuries, biochar was produced using different indigenous methods, but the principle of all these methods was simply to pile and cover the biomass, allowing it to burn slowly under limited air. All the methods used in the past were involved in creating substantial amounts of smoke, but there was no use for the excess amount of heat energy generated during the process. In recent decades there have been improvements in char production techniques, and scientists have developed environmentally friendly technologies that allow the production of specific quality char to be used for specific purposes, such as improving soil fertility, producing bio-energy, reducing greenhouse gas generation, and decontaminating soil and water.

Our local experiments with beets in test plots have shown that adding biochar to the soil greatly increases productivity, when combined with fish meal or chemical fertilizers. We are also experimenting with biochar to treat mine tailings and organic solid waste. Who knew that this ancient technique would make its way to the Labrador Institute!

For further information about biochar: http://www.biochar-international.org/technology/production 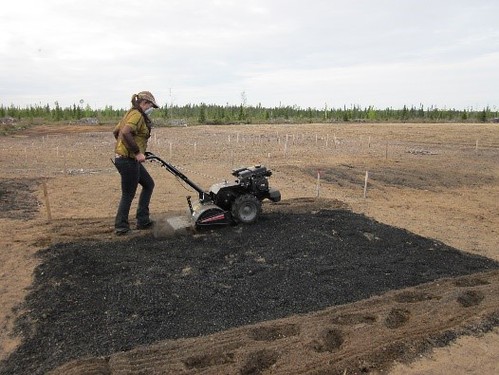