'A' is for Adlatok Bay

Approximately 40 kilometres south of Hopedale lies beautiful Adlatok Bay, the old homestead of familiar Labradorian names like Mitchell, Gear, and Goudie, the descendants of whom can trace their heritage back to this once-busy community of settler families. Today, people love to go “up the bay,” as it is generally referred to by Hopedalimiut, to hunt, fish, trap, and spend time at their cabins.

The Adlatok River flows eastward from the Quebec-Labrador boarder and empties into both Adlatok Bay and Ujutok Bay. In the past, Innu hunters and their families used parts of the 258 kilometre-long waterway as a travel route from the country’s interior to the trading post at Hopedale. The name comes from the Inuit word Allaktok, meaning “where there are Innu.”

At one time, families lived in Adlatok Bay all year long. There were gardens, a rhubarb patch (still growing today), and a store that sold supplies to those who lived in and visited the area. It eventually became its own community of sorts during the 1930s, led by my great-grandfather, Willie Mitchell. Many of the original buildings are still there.

One of the most recognizable landmarks of Adlatok is the 19th century two-story home of Edward Mitchell, the son of well-known settler Robert Mitchell, who came from England in the 1830s to make the Labrador coast his home. The original house burnt down, but was rebuilt a short time after and stands today in all its glory, complete with three dormer windows and surrounded by birch trees and willows, its English architectural style an interesting contrast to its wild Labrador surroundings. The Old House, as it is commonly referred to, was passed down through the generations and eventually to my mother’s parents; the home is referenced in publications such as Them Days Magazine; Raymond Zinck’s Labrador Adventure; and the Labrador Memoir of Dr. Harry Paddon, 1912-1938. Paddon described the house, which then belonged to Willie Mitchell, as a “comfortable and prosperous home,” and remembered Adlatok Bay as “a wonderful place for fur-bearing animals with a fine salmon-river,” and “a place where grouse abounded.”No wonder the Mitchells chose to settle in Adlatok Bay!

Adlatok Bay, like much of the Labrador North Coast, is a place of unspoiled, natural beauty. Adlatok is unique in that it is surrounded by trees and vegetation, and abounds with resources like fish, partridge, wildlife, and good wood for burning. It is also worth noting that the salmon fishing on the Adlatok River is not only good, but world-class. In fact, in 1994, former United States President, George Bush Sr., visited the Adlatok River on a fishing trip. Later on, then Canadian Prime Minister, Jean Chretien, did the same. I wonder who had better luck!

My mom, Irene, whose father was a Gear and whose mother was a Mitchell, spent summers in Adlatok Bay where her dad, Jim, would fish. Many families from Hopedale would go there in the summertime and return for school in the fall during the time when my mother was a very young child and teenager, in the 1950s and 60s. My mom remembers watching as a child from Spying Hill, overlooking the bay, for signs of visitors and the return of those who would journey to Hopedale for additional food and supplies. “It was so exciting to see or hear a boat coming,” she said, recalling the memories with great delight. Those who have the pleasure of visiting quickly fall in love with Adlatok Bay, evident in the way many earlier pioneers and leaders discuss its natural beauty in Labradorian literature. 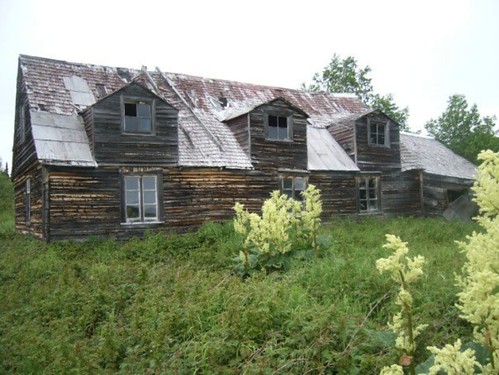